Wonder. Inspired by the Creator God. It’s all around us. Let’s take a look!

Every morning, on time, in any weather, in every season, the sun rises. The sun shines on people who love God, people who don’t know Him and people who hate Him.  The sun shines on the earth even when you can’t see it because there is a thick cloud layer.  One of the most amazing things about airplane flight is that we get to see the earth from above. There is nothing more magnificent than taking off in the rain and soaring above the clouds into the bright light that is still shining in the heavenlies. One of the reasons I love flying is that I feel closer to Him above the clouds. 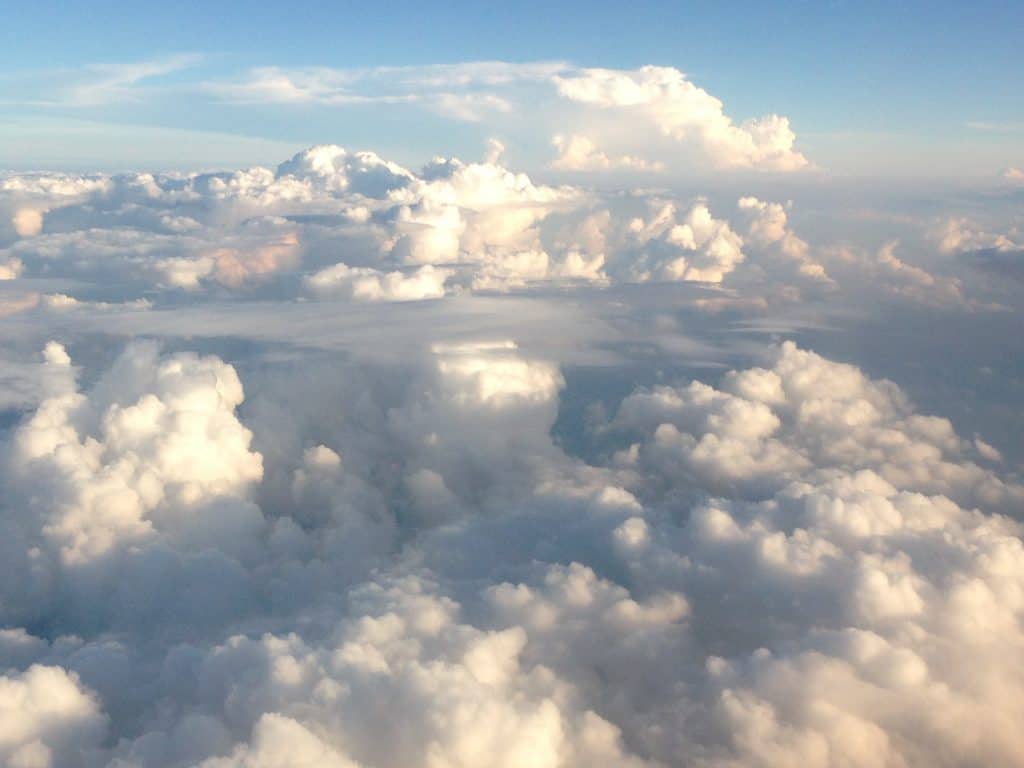 Every sunny day I take time to look up at the sky as it unfolds varying shades of blue with magnificent cloud formations that change before our eyes. I try not to miss a sunrise or a sunset. And I often pull my car off the road just to watch the clouds. Every cloud is different. Each is unique to the type of weather it is carrying in or out. How wonderful for us that we get to enjoy so many different sculptures every day.

Rachel Carson wrote a literary treasure called, The Sense of Wonder: A Celebration of Nature for Parents and Children. It was the one book she most wanted to complete. She believed that parents need to have their children spend time in the natural world to instill not only wonder, but also reverence. This book celebrates that. Carson started writing the book in 1955 when her grandnephew came to visit her in Maine. They wandered in the forest and tide pools near her home. She wanted to introduce him to the magical feeling that accompanies seeing natural beauty.

Rachel Carson said when writing about wonder, “the material comes to my door without half trying.” I sometimes feel the same way. Each week I set out on my walk wondering what the Lord will tell me to write about. Sometimes I hear right away, sometimes it unfolds, but always it is from the same source, the Creator God. I was blessed as a child to have miles of woods and fields in which to roam and play. I was also blessed by a father who had the sense of wonder about the outdoors and instilled it in me. I need to be in natural settings as much as I need to breathe.

Most of the time when I am walking, I’m keeping a sharp eye out for little things. Sometimes I discover them by accident, often because I’ve been drawn off the path to look at something that has caught my eye. I will be investigating a lichen and discover that a woodland snail is also enjoying it. But then the wonder gets multiplied when I take a longer look at the snail. His shell is varied in color, not just brown. It’s marked with runes maybe from Middle Earth. And then there is his head with those wonderful antennae. He moves very deliberately, but when I come back down the same path a half hour later, he’s vanished into the landscape.

Other times I’ll find a creature’s abandoned home hiding in the bushes. This puts me in awe of birds and moths who build these nests out of sticks, paper, leaves, lichens and yes even spider web strands. All of this was going on invisibly while the leaves covered the branches of the bushes and trees. I can only guess which bird and which moth was building his home unbeknownst to me. But God knew. He sees every bird, moth, snail and animal in His kingdom.

Several days ago, I took a walk in the nearby nature preserve. I enjoy it because I’m treading on an earthen path and I hardly see anyone. I enjoy the complete silence except for the birds and squirrels and the occasional deer. I explored a path that led through a lovely pine forest and sat down on a bench. There were a lot of birds flitting in the bushes, chickadees, titmice and kinglets. The others moved so fast I wasn’t sure. A flicker landed in the upper branches of a tree across the path. I couldn’t figure out why he wasn’t working the tree for bugs. But I soon saw with my binoculars that he was preening his feathers. He’d rough them up, then lift a wing and press in. He stayed in that tree for fifteen minutes before he decided to fly off. All the while, I watched in delight. Gazing across the marsh, I saw a huge beaver hutch. It had to have been fifteen feet wide and at least four feet high. I’d never seen it before, probably because it had been hidden by the leaves on the trees. The beaver’s pile of cut trees borders a huge marsh. I wouldn’t have thought there was enough water for the beavers to live there, but I guess I was wrong. They were not out today that I could see, although I did hear some noises on the water that might have been them.

So why spend time thinking about wonder? Because the wonder-full God who created everything you see outside wants you to appreciate who He is and what He has given you. It’s one of the ways He communicates His love and care for you. Wonder inspires us to revere our surroundings. It takes us out of the ordinary, the doable and our personal lives to see the God who created all of it. Once you grasp the enormity of the Creator God, it’s hard to not love Him, the one who said we are “fearfully and wonderfully” made. The God who sees your unformed substance before you are born. This is the God who never ceases to inspire wonder.

“The heavens declare the glory of God; the skies proclaim the work of his hands. Day after day they pour forth speech; night after night they reveal knowledge.”