The next time you are walking or hiking, look around for the unfinished stories that the Lord has placed in your path. Some creatures have left evidence of their passage from the day before. Other stories will show up after your footfalls have long been silent along the trail. But they are everywhere. There are thousands of unfinished tales lived out in the woods and fields around you that you will never know, except for a few.

Last summer, I watched a swallowtail butterfly delighting on the nectar of my lantana blossoms in my garden. One of its trailing tails had been broken off. It made me wonder, how did that happen? Did it escape the beak of a kingfisher while it floated lazily along one of the creeks? Where did it hatch? How far had it flown before it arrived in my garden? Where was it headed?

One day when I was walking with a friend of mine, we came upon a lovely painted turtle crossing our path. I wondered at the time where it had come from as we weren’t near a water source. How old was it? The colors were vivid, and it didn’t seem to mind us observing and photographing it. Usually, these creatures quickly retreat into their shells. It seemed very brave. I wondered where it would be at the end of the day.  We were close to a road so I hoped it would not turn and crawl that way. 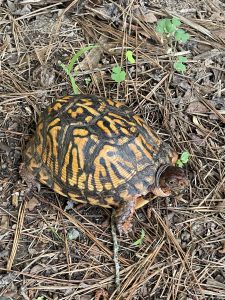 Recently I’ve been finding feathers along my path. Each time I wonder was the bird molting? Or was it caught in a skirmish that I didn’t see? What was it doing when the feather took flight? Half of it was fluffy which I’m sure gave it a lovely descent to the ground. Did anyone see its flight? What kind of a bird was it? Usually, if it’s a tail feather or sometimes a wing feather, I can tell the species of bird. But often, when it is part of the fluffy down insulation and not highly colored, I have to guess. Was it by itself? Or was it on its way home to its nest with a juicy caterpillar for its squealing youngsters? Where had it traveled that day? 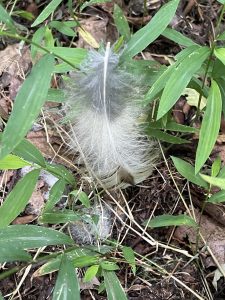 These are unfinished and untold stories happening around you every day. Each person you meet or pass by in the grocery store is an incomplete story. Many, if not most of them, you will never know. Sometimes I try to figure out what is going on in their lives just by the way they smile or don’t smile, avoid my eyes, or act annoyed by my presence. I genuinely believe this is what Jesus saw day after day and why He spent so much time with the crowds of people who came to see him. He wanted so much to be a part of their unfinished lives. Think of all the stories in the Bible. Whatever happened to the woman accused of adultery? To Rehab after she and her family escaped destruction.? What about Mary, the mother of Jesus, and Mary Magdalene? All of these people had lives that went on after their encounter with Jesus. All of them could put a mark in the sand before and after meeting Jesus. How about you? Is your life divided by when you didn’t believe and when you did? Was there a change in the way you lived from the moment you met Jesus? If not? Why? Some of you gave your life to Jesus when you were children. So your life may not have a specific time when you chose to follow Jesus. But your walk with the Lord still has a past history and a future yet to be written.

Each of our lives is an unfinished story. Stories that we won’t know until we reach heaven. Make sure yours is one you want to tell. Jesus has already seen it before you were born. But you still get to live it out. Make it count for Him.

“For I know the plans I have for you,” says the LORD. “They are plans for good and not for disaster, to give you a future and a hope.”