Some of my best memories from childhood are of walking in the woods along a river and playing on the rocks. I would mark the river’s changing appearance over time depending on the presence or absence of rain. High in the mountains, there always seems to be more water in the rivers and streams from melting snow and underground springs. Here in the Piedmont of North Carolina, even in a dry midsummer, water traveling over rocks and rapids offers a pleasing sound. Often I’ll just sit by a river, watch the changing reflection of the leaves on the water and listen to its varying sounds.

When I was a child, my father and I would hike along the Black River in NJ. The trail we took led down to the river that ran through several parks. Glacial boulders preceded the appearance of the river, but you could always hear it once you were embedded in the woods. Arriving at the bank of the river, we would search for ways to jump rocks. Our goal was to find a place where we would be able to cross the river or find a spot in the middle of the river to watch for birds, fish, dragonflies and anything else that might appear. Most of the time we took off our shoes for this journey into the river, but several times we were rewarded with soakers as a steppingstone fooled us by rocking unsteadily underfoot. Once settled on a rock in the middle of the river, we would soak our feet and throw twigs into the water and watch them ride the rapids. Sitting in the sunshine with only the sounds of the water was peaceful and refreshing. Nothing mattered but nature unfolding around us. 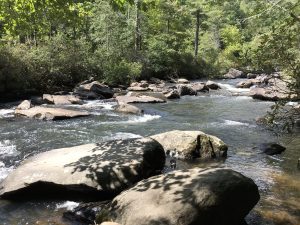 As an adult, I’ve retained this love of rivers, their rocks and pleasant sounds. It is one of my delights to be hiking and come upon a river or even a brook winding its way through the woods to a destiny I will never see. If the trail meanders away from the river, I will often follow deer trails (or human trails) down to the river. I’m never satisfied until I’m right on the bank or have found a rock to jump onto. And yes, I do occasionally get a soaker even to this day. But it’s so worth it. 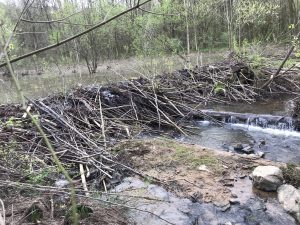 I was reflecting upon these memories one day as I sat by our creek and listened to the water flow under and over the beaver dam and through the rocks that lay in its path. I was reminded of the river that flows from the throne of God. That throne we know from the writings of the John, is surrounded by “a sea of glass, like crystal.” In another place he writes that it “appeared to be a sea of glass mingled with fire.”*

It seems John had a tough time putting into human words what he saw with spiritual eyes. He uses the words “as it were” and “appeared.” It’s hard to reconcile a “sea of glass” as we most often don’t think of the ocean as being smooth as glass. The vision also describes the “sea of glass glowing with fire” which seems like an oxymoron. But that’s because we don’t possess the ability to write what gets seen in the spiritual realm. While we do not know precisely what John saw, we do know the complete purity and holiness of God and that He dwells in unapproachable light.  We know that righteousness and justice are the foundation of His throne; love and faithfulness go before Him.**

But John also saw a river flowing from the throne of God. Pause for a moment and read the description of that river in the heavenly realm.

“Then the angel showed me the river of the water of life, as clear as crystal, flowing from the throne of God and of the Lamb down the middle of the great street of the city. On each side of the river stood the tree of life, bearing twelve crops of fruit, yielding its fruit every month. And the leaves of the tree are for the healing of the nations.” ***

Close your eyes and meditate on this beautiful scene. It’s one we will see someday. That river cleanses, heals and restores. Its source is God alone. Drink deeply of that river, spend time in its waters, and revel in knowing the God who created it just for you.

“And he also said, ‘It is finished! I am the Alpha and the Omega—the Beginning and the End. To all who are thirsty I will give freely from the springs of the water of life.’”