I looked at the steep gravel path that led to the top of Whiteside Mountain. This was going to be a real test of my fitness. I’d not hiked to the top of a mountain since spending time in the Highlands of Scotland with my goddaughter. The parking lot was full and everyone from babies being carried in papoose-like carriers to toddlers, to kids of varying ages and adults were excited to embark on this hike. I wondered, what is it that makes us want to climb to the top of a mountain? The challenge? The view? The path along the way? All of them.

While the Smokies are not as high as the Rockies, they are still a force to be contended with on foot. Fortunately, as I set out a nice couple told me I could easily take the gravel path up and back and avoid the steep climb up the rock stairs. I was all for that. I don’t like being on a path where I can’t stop and look at the fungi or wildflowers. If there are people right behind me, I’m not as relaxed and don’t enjoy the hike as much. 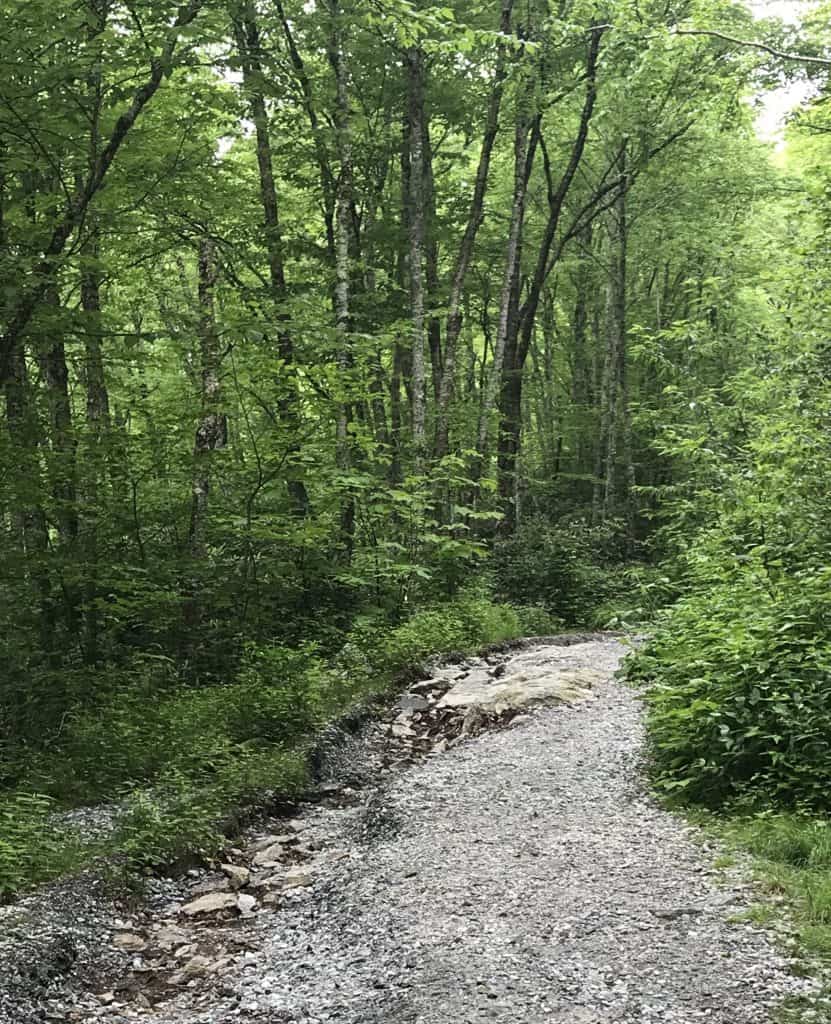 Clearly I was one of the slower hikers. The shorter, steeper route that clambered up stone steps was definitely quicker, but I try to stick to my limits in the mountains and respect their immensity. This is why I love the mountains. I feel small and insignificant against their majesty and I find this comforting. I remember the first time I encountered this feeling was hiking in the Rockies at Crested Butte, Colorado. These mountains are so overwhelming that you stand back in awe. They appear so immovable and their presence so immutable. I sensed something greater than me, more powerful in its construction and more lasting in its place on the planet. Only God, who can hold the ocean in the palm of His hand could sculpt out these mountains. Psalm 95 says, “the mountain peaks belong to Him.” Yes, indeed. 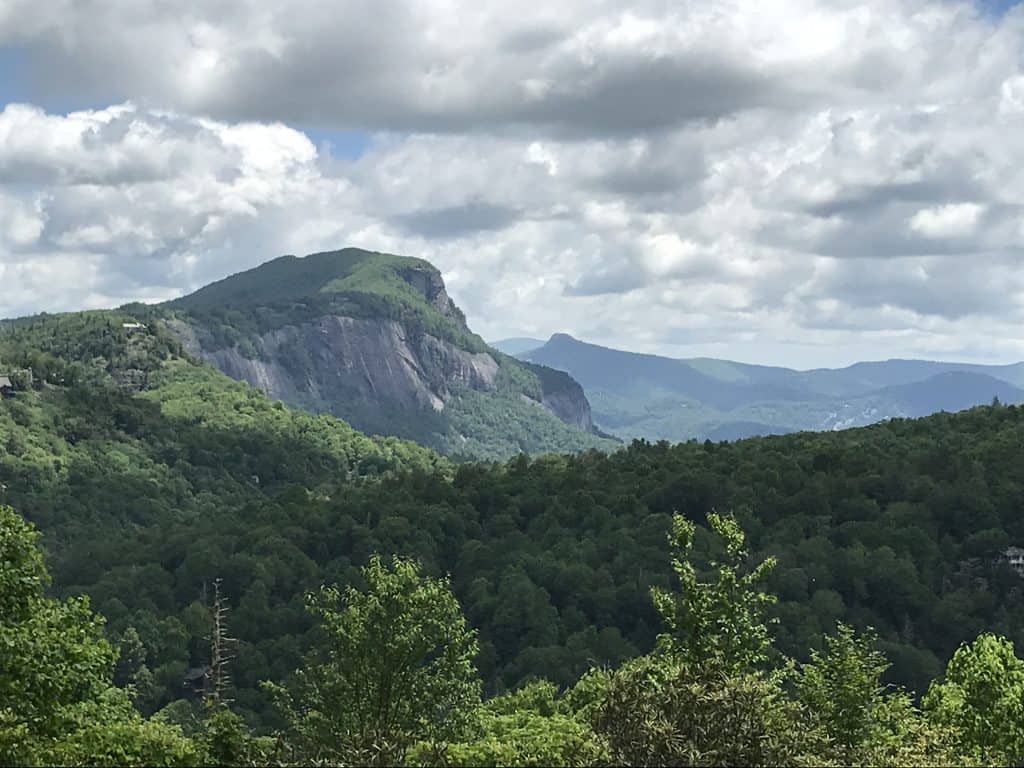 About halfway I started to wonder how far I’d gone and if I’d make it to the summit. I know there are GPS tracking devices that can tell you how far you’ve come, but part of the journey is not knowing when the summit will appear on the trail ahead. Uphill all the way, mostly a gravel path, but muddy and rocky and filled with roots and little streamlets along the way. To my right there were rock faces covered with moss where water was dripping down. Ferns and wildflowers were clinging to whatever spot of earth they’d found. It made me wonder where all the water was coming from. Except for places where there were actual streams, most of the water just seemed to be oozing out of the woodland and over the rock face. 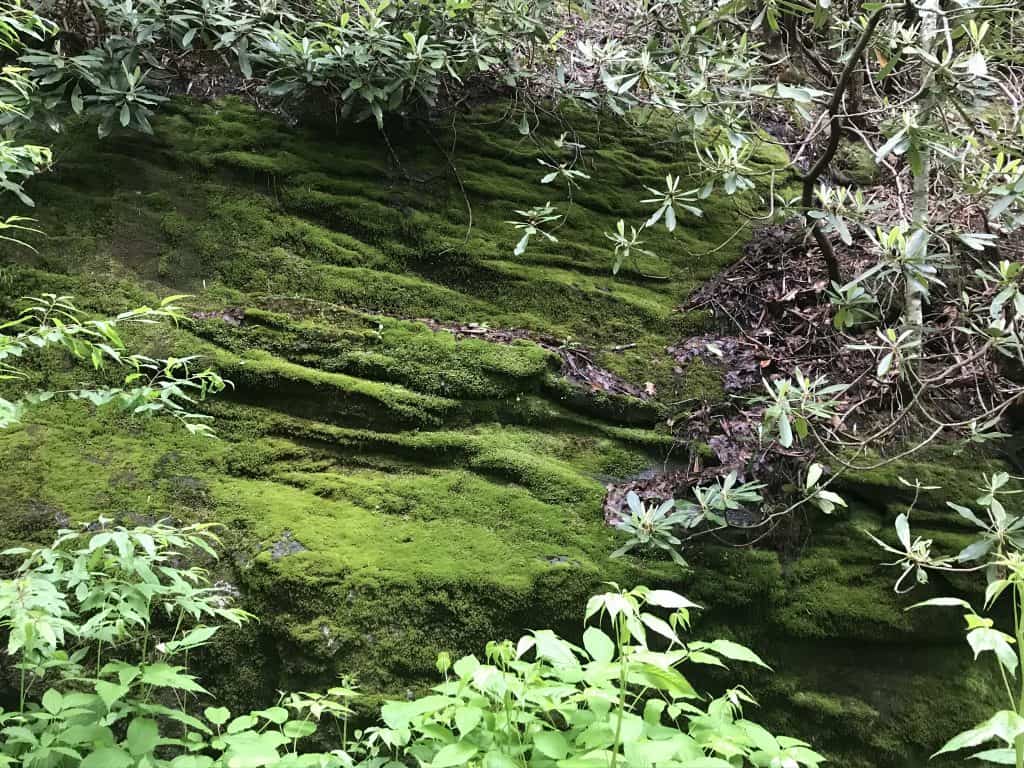 The top of this mountain is part of the continental divide of the east. All the rivers to the west flow through Tennessee and to the Mississippi. Those to the east flow to the Atlantic. It made me want to be a stick or a leaf and travel the river to its end point. Think of all the wonderful things you’d see and hear along the way. Bird song, rocks and waterfalls, the rustling of leaves on the trees, the wind at night and the soft treading of creatures that you can’t see. How many footprints were scattered within these woods that no one sees but God?

After over an hour of hiking, with stops along the way to photograph the mountain laurel that was just bursting into bloom and the numerous wildflowers growing complacently along the path, I could see that I was getting to the summit. The sky was brightening as I looked toward the path ahead. I approached the summit with great expectations of what I would see. I was not disappointed. The view was spectacular, much better than any camera could capture, and I was entranced. Fortunately, there was only one other couple at the summit so I had the place almost to myself. 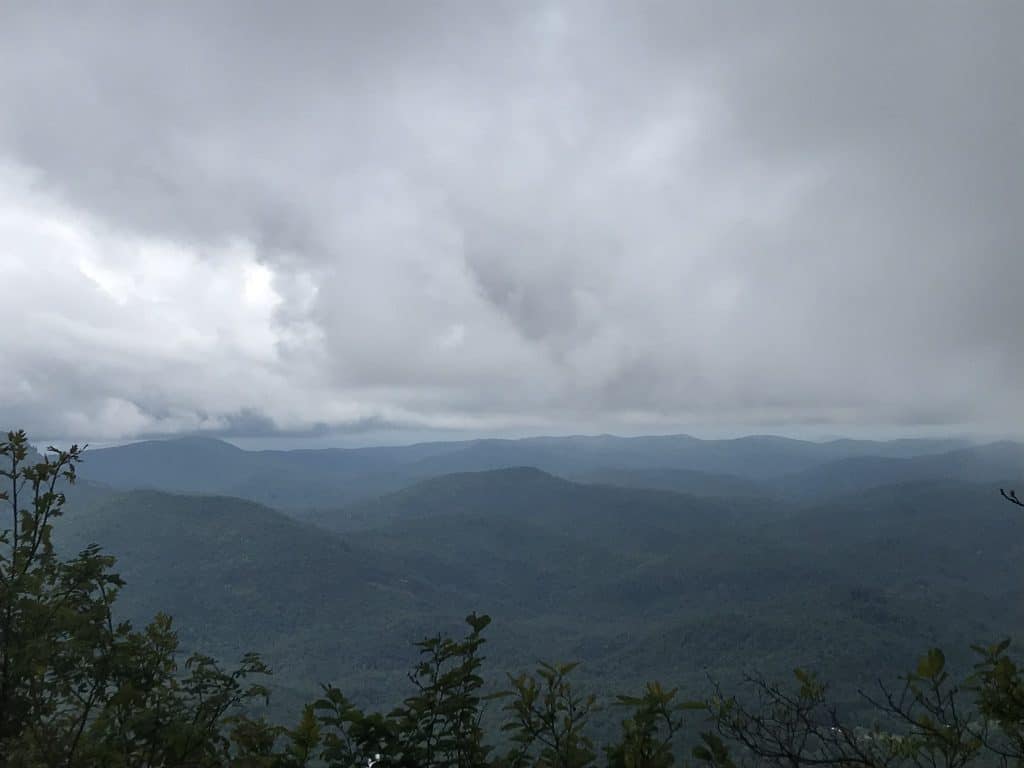 At the second lookout point, there was a viewing station built out over the steep side of the mountain. This of often a place to watch birds of prey gliding on the updrafts. Here I was all alone. I’m not terribly good with heights anymore, but I ventured to the edge of the railing and gazed out at the mountains below. This is why we climb. The view from above is worth the effort. Always. Apparently, I had reached the summit in the nick of time as off to my right clouds and mist were blowing in rapidly. Soon the summit would be covered and the view obscured. I wondered if I would be hiking in the fog on the way down. Celebrating my good fortune and thanking God for His timing, I started the downward trek reluctant to leave the view, but not wanting to hike the gravel path in the mist.

The descent was quicker, of course, but I got to stop for several lichen and wildflower photos along the way. Many of the trees along the pathway are covered with multiple lichens. At home, the lichens tend to dominate the dying ash trees. Here the trees and the lichens seem to be living together happily.

It’s fascinating to me that the forest has huge trees, large expanses of mountain laurel and rhododendron, and also the tiniest of flowers, bluets, violets and maidenhair fern blossoms. Such minutia in such a large immovable landscape. Nothing escapes God’s provision for us. To think that He created all of this for His and our enjoyment. Such a God we serve.

“He who forms the mountains, who creates the wind, and who reveals his thoughts to mankind, who turns dawn to darkness, and treads on the heights of the earth — the LORD God Almighty is his name.” 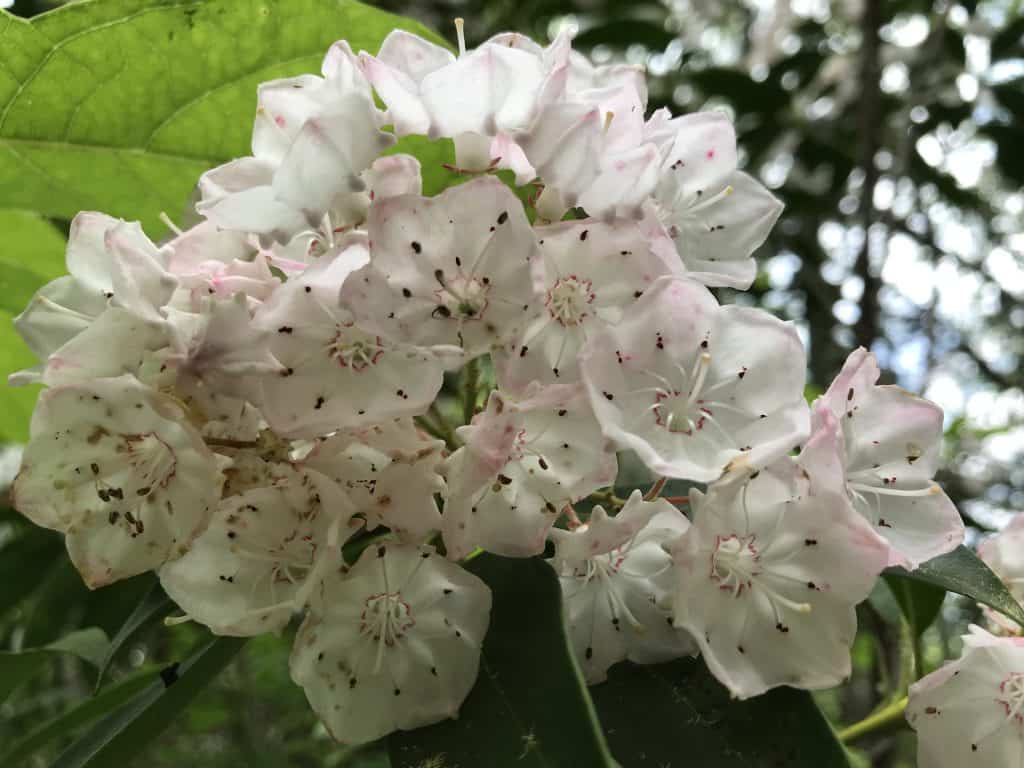