When you walk every day as I do, on two separate paths, you see the same trees and wildflowers every day. Or do you? While the forest as a whole doesn’t change dramatically unless there is a storm and some trees and limbs come down, or the creek rises, there are subtle changes that go on every day for the discerning eye. And that is part of why I write these blogs, so you can become more adept at noticing these changes. The Discovery Guide which you received when you signed on as a subscriber gives you suggestions on how to look deeper at the natural world. It covers light, sounds, colors, air movement and even fragrances. All of these enhance your journey.

But there is one thing that always appears on the pathway, serendipity. This requires boosting your curiosity one level to begin to see beyond the forest to examine some of the smaller, less obvious gifts the Lord has laid out for you. It’s rather like a treasure hunt. Every day the Lord has placed something new for you to see in His creation. It could be big like a sunset or a sky full of clouds. More likely it’s small. What I have discovered is that often my eye is drawn to something on the side of the path. A colorful leaf has fallen, a wildflower is highlighted in a shaft of early morning sunlight. An unusual shape is seen on a stalk of goldenrod, oh it’s a snail making its way up the stalk!  And look, there is a grasshopper embedded in the goldenrod, waking up to a new day, chilly with the morning dew.

Sometimes, I am distracted because my pup has gone off to investigate something along the path. One morning after a particularly heavy rain storm, the woods and tributaries emptying into the creek were swollen. My pup has decided that moving water is something which she needs to warn me about. Standing on the side of the wooden bridge over the wet area she was barking at the water that was rushing underneath the decking. Normally I just let her bark and go on. But this morning she was particularly disturbed. Walking over to her side I happened to gaze down at the wooden railing on the bridge. Some lovely, bright gold jelly fungi were sprouting up through cracks in the railroad tie. Having laid silently in a dry spot, the wet wood and rain had made them spring to life and fill out like little flowers emerging out of the wood. All along the tie, wherever there was a crack in the wood, these bright fungi were emerging happily into the sunshine. 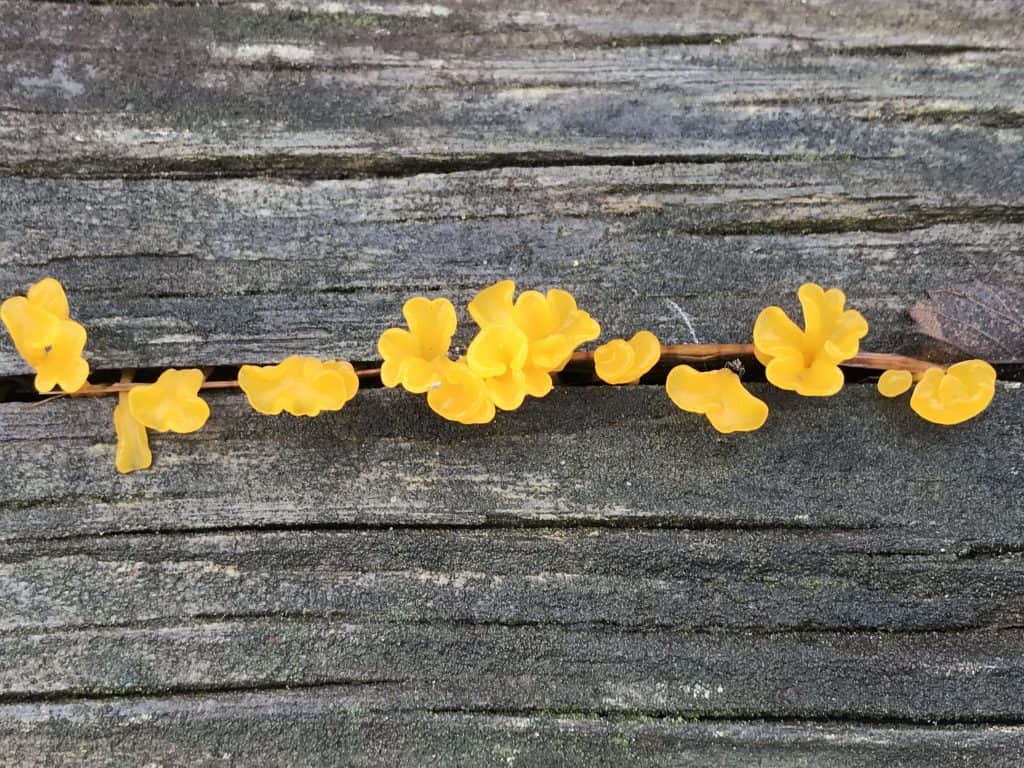 Walking over to where the biggest crop of the gold jelly fungi was growing, I spied a salamander sunning himself along the low railing. He was perfectly camouflaged being the same silver grey as the railroad tie Except for one thing. He had a lovely aquamarine tail that stood out like a beacon. Last year I saw a salamander with a hot orange stripe. This poor guy looked tuckered out. I’ll bet he was glad to escape his home under the decking and sun himself. It must have been quite a night as everything surrounding that bridge was flooded. I wondered if he’d been there all night or had just emerged to sunbathe. 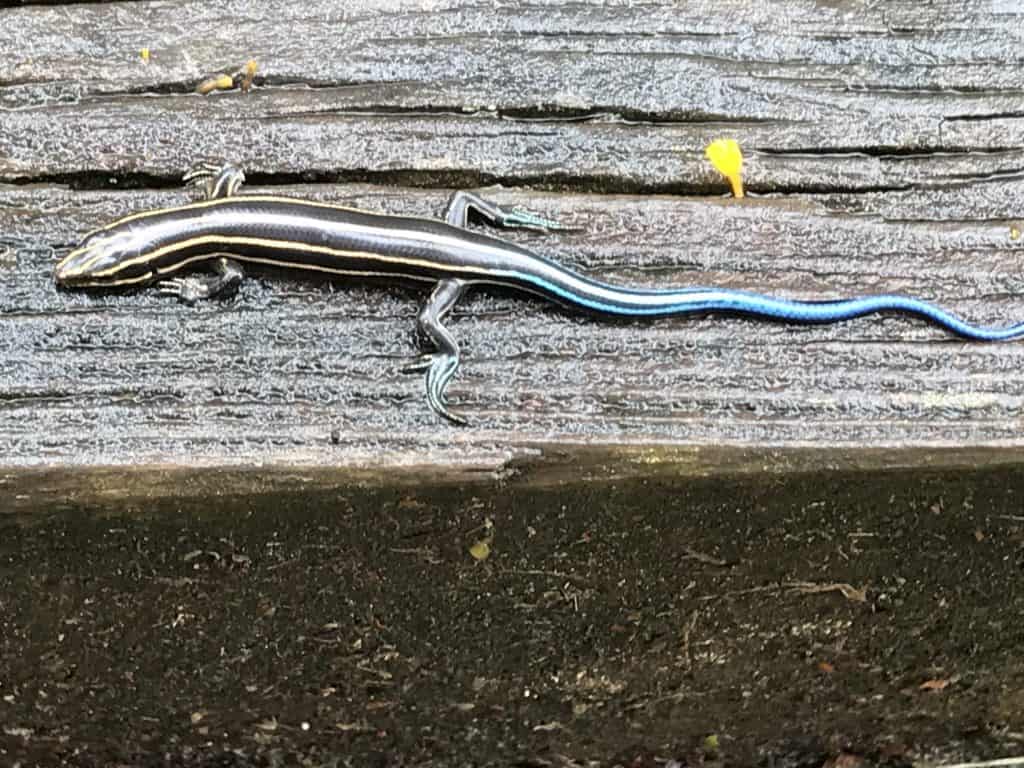 Either way, if I had not taken the time to walk over and investigate why my pup was barking, I would have missed two treasures. It is a good thing she did not spy the salamander, or a chase would have ensued. When they sneak into my screened in porch or run in the dirt outside the screen barrier, she goes nuts trying to capture them. Fortunately, she’s never succeeded. The same principle held true about the grasshopper. I originally walked over to the edge of the field to look at the dew collecting on the blossoms of goldenrod. But I was given the added treasure of seeing the grasshopper up close and being able to study his legs and body up close. I think one of his back legs is missing. No wonder he was resting quietly.

Every day I ask the Lord to show me something new. I am never disappointed. Sometimes in the middle of winter I begin to doubt I’ll see anything. But He always comes through. There is always treasure to be found when you walk with the Lord.

“Every good and perfect gift is from above, coming down from the Father of the heavenly lights, who does not change like shifting shadows.”