Everywhere you walk, in the woods or fields, by a stream, or in your neighborhood, the evidence of God speaks out. “For since the creation of the world, God’s invisible qualities—his eternal power and divine nature—have been clearly seen being understood from what has been made, so that people are without excuse.” (1) The Lord has provided ample evidence that there is a Creator God. Spring is one of the most exuberant expressions of His creative handiwork.

But what of the unseen evidence? Where does the wind come from and go to? Jesus said, “The wind blows wherever it pleases. You hear its sound, but you cannot tell where it comes from or where it is going. So it is with everyone born of the Spirit.” (2) Who shapes the thousands of clouds, each one different? Who crafts the intricate snowflakes that no two are alike? Who decided that we would each have a unique fingerprint and a unique DNA? 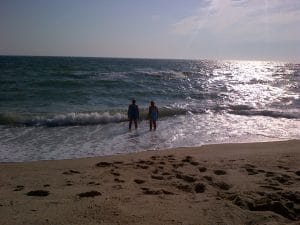 One of the greatest pleasures of being at the beach is watching the rhythmic motion and listening to the sound of the waves. The tides come in and move out with precision and regularity, yet few think about how. Yes, it is the moon that sits thousands of miles away that regulates the tides, but who put the moon in the sky giving it this specific function? Who decided how much water would fill the seas? Genesis tells us that the Lord placed the moon and sun in the heavens on day four of creation. The moon precisely and perfectly regulates our tides. Any minute variation in its position and exact size would change the ocean. The waves keep to the shoreline, both high and low tides have their appointed rim on the beach. They don’t overflow their boundaries except during a storm. And even then, they don’t flood the earth as with Noah. Even the amount of water in the ocean God carefully manages.

We know Job had a conversation with God about all of this. The Lord asked Job, “Who shut up the sea behind doors when it burst forth from the womb, when I made the clouds its garment and wrapped it in thick darkness, when I fixed the limits for it and set its doors and bars in place. When I said, ‘This far you may come and no farther; here is where your proud waves halt?’” (3) And yet some would still debate the Lord. 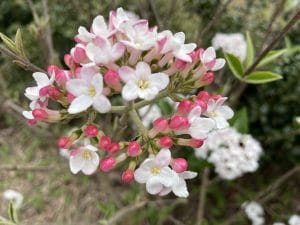 But beyond all of this, there are other unseen things that we know exist. Scientists accepted the belief that there were molecules and electrons even before they could see them. We accept the existence of love, beauty, and hope, yet you can’t see them. We recognize artists combine musical notes to create a symphony. But how it moves our senses and affects our emotions, we really don’t know. We know humans can think and create beautiful art. Yet how does that happen? My Viburnum carlesi puts out flowers that are sweetly fragrant, and in the evening this fragrance pauses in the air so I can smell it sitting 10-20 feet away on my screened porch. But how does that happen?

As the spring unfolds, trees put out leaves and seeds. Ferns grow from curled up fuzzy circles into lovely fronds. Tadpoles become frogs. We observe these things, but we can’t pinpoint exactly how this happens except that God created them to have this metamorphosis. Even the most materialist of scientists would have to admit that the odds of our world in all its complexity, happening by random events, are so astronomical you wouldn’t believe it. You’d have to take it on faith. But then why have faith in science and matter when you can have faith in their Creator?

So where does this leave us? With a wealth of treasure out our doors to be explored, appreciated and for which to be thankful. To praise and glorify our God, who would do all this just for us. I’m glad I don’t have all the answers. Because I wouldn’t want to have the conversation with the Lord that Job did.

“The heavens proclaim the glory of God; the skies display his craftsmanship. Day after day they continue to speak; night and after night they make him known.”