I spend some of my most precious days walking in the peacefulness of the woods in the nature preserve. On many occasions, I only see one or two people over several hours. I am content to sit on a bench deep in the woods and listen for the calls and songs of the birds, enjoying the companionship of God. When I walk amidst the pines, the wind whispers to me, hushing the cares of my soul. Other times, I sit on the deck overlooking the marsh and watch for dragonflies, butterflies, and the many birds that live and feed there. The sound of bullfrogs reminded me of evenings growing up in the country. We had several giant ones that inhabited the edge of our sky pond. I would count the number of times they belted out their evening song. I think nine times was the maximum. Today I heard one make it to nine.

One particular day was so saturated with birds and sounds that it stands out from all the rest. Often there aren’t a lot of birds in the marsh. Today was an exception. I followed two red-shouldered hawks soaring on the updrafts. Another perched on a dead ash tree. Its feathers shone like burnished gold in the sunshine. Finally, it flew to the safety of the woods after being harassed by three kingbirds. One of these birds later came and perched on a branch above me and consumed the damselfly it had just caught. A great blue heron glided over the marsh and returned about a half-hour later. They are stately in their hunting pose, but they are spectacular in flight with their enormous wingspan and lovely silhouette. One of the more elusive birds, a belted kingfisher, sat in the top of an ash tree looking for his next meal. This is the bird I use as my website logo. The red-winged blackbirds were also flashing their colors. When they fly, their wings appear to be on fire. With such a full display of birds, I was even more reluctant to leave the marsh and return home.

Farther down the path, a barred owl perched in the top of an oak tree. He stared down at me for a good ten minutes, swiveled his head around several times looking for prey, but finally went on his way. I later heard two owls in a heated conversation deeper in the marsh. I wondered what that was all about, but I was too far to get near them. Even though it was a chilly day, the snakes were out. I found a black snake sunning himself in the grass alongside the path. Fortunately, I saw him in time to pick up my pup after she gave it a good look. I think she recognized it from her first encounter with one. She was staying with friends, and the snake came and poked at his reflection in their sliding glass door. She barked at it and scared it away. 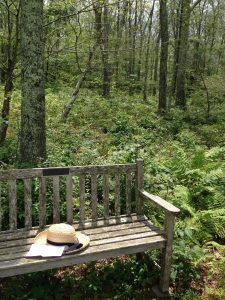 The woods provide a deep sense of peace within me. The comings and the goings of the marsh remind me that I am part of a larger world created not just for humans but for plants and animals to live and enjoy. Often, I will see the birds in the marsh hunting bugs and fish. But I also see them sitting on top of a tree branch, enjoying the wind ruffling their feathers and the sun on their wings. I believe the Lord created the woods and marshes also for the animals to enjoy. But for me, there is more. I feel saturated with His holy presence when I am there. Everything around me declares His glory and praise. And I sense my place firmly grounded in His world, His will, and His pleasure.

“The heavens declare the glory of God; the skies proclaim the work of His hands. Day after day they pour forth speech, night after night they reveal knowledge.”