The earth is the LORD’s, and everything in it. The world and all its people belong to him.*

One of nature’s unseen yet predominant characteristic is the display of hidden partnerships that make God’s creation work together. In the Garden of Eden, plants and animals peacefully coexisted. Survival of the fittest didn’t rule, and death hadn’t tainted the world. However, once sin entered the Garden, things changed. Competition came into the picture, and survival of the fittest became the norm. But even with the entry of sin into our world, God still uses order and relationships to keep the planet in balance.

When I walk in the field or forest, I often see God display partnerships among the plants and animals. Without these relationships, the ecosystem would soon fall apart. Right now, yellow coreopsis, wild sunflowers, and goldenrod line the edges of my path. If you look closely and listen carefully, you will hear several varieties of bees busily attending to the nectar and pollination of these plants. Some of them are so tiny that if you do not pause on your journey, you’ll miss seeing them. Butterflies are also stopping to gather nectar and helping to pollinate the fields.

Late summer and fall berries now are appearing in the woods. Blueberries, blackberries, black cohosh, false Solomon’s seal, and other plants put forth their seasonal fruit for animals to enjoy. An adult bear roaming the Smokies will eat approximately 200,000 blueberries in one season. God formed the bear’s lips perfectly so he could eat the berries right off the bush. This makes a lot of sense since their long claws would get in the way of picking small berries!

The wind and rain are great partners of seeds, sending them away from their origin. Birds living in the forest and fields will eat the fruit, later drop the remains and possibly start a new patch of berries elsewhere. The wind carries seeds everywhere, as does the rain. It’s clear from the number of “escape” plants that I see in the forest this happens frequently. Sometimes a bird will drop a whole berry. Instead of going after it, he takes another, and the fallen seeds take root in the soil. I see this in my yard when the birds drop sunflower seeds. They don’t retrieve them, probably by instinct, but rather race back for another. Weeks later, these dropped seeds are sprouting happily amidst my garden flowers.

The oak trees send out thousands of acorns, feeding the animals that inhabit the woods and starting new saplings. And I’m sure that some of the pawpaw fruit and persimmons that get eaten by animals also send seeds elsewhere. 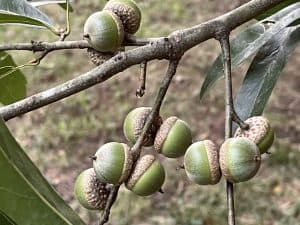 We know from research that trees communicate with each other at the root level and also at the branch level within the overall canopy. The underground communication and co-mingling of roots benefit all the trees as well as the animals that need the trees for nesting and shelter. 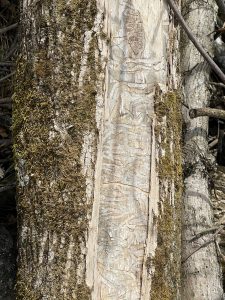 Another partnership often overlooked are the mushrooms, fungi, and wood-eating insects. There are always dead trees in the woods. If you peel back some of the outer bark, you’ll see the trails of insects living between the bark and the core of the tree. Last spring, I vividly remember a shiny, deep crimson beetle that scurried away when I uncovered its hidden lair underneath the outer layer of bark.

The fairy ring of mushrooms that suddenly appears on your lawn may signal the remains of a tree that once stood in your yard. All of the mushrooms and fungi you see are busily decomposing the dead trees turning them back into soil.

I do believe the Lord intended all of nature to be interdependent and kept in perfect balance. That is why He put man, a sentient being, as its steward. We are to cultivate and preserve the forest and fields so that they live on for years. It is our job to make them flourish and thrive. While we have made great strides, I’m not sure we would have a passing grade at this point on the planet. Our desire to consume has overtaken our desire to live in harmony with our environment. And our desire to conquer has made an entire industry of pesticides. Rachel Carson knew about this. She promoted teaching our children how to revere the natural environment in her book The Sense of Wonder. Teaching kids about the beauty and fragility of what they see is paramount. Teaching them to respect their surroundings is also a way to teach them how to respect all living things, humans included. The Lord will indeed one day destroy this earth and start again. But that is no excuse for letting it fall into disrepair between now and then. How we individually steward the planet says a lot about how much we cherish the Creator who made it.

“Now it is required of stewards that they be found faithful.”
Corinthians 4:2 BSB