One of my favorite pastimes is watching the birds that inhabit our mountain ridges. Many are not residents in the Piedmont where I live, which makes for wonderful discoveries. My first encounter of the year was on my deck, high atop the Pisgah National Forest mountain range. From my balcony, I had a 180-degree view of the Blue Ridge mountains looking southwest.

I enjoyed a quiet morning with the birds and the clouds, grateful for the peace and beauty. Much of the time, an indigo bunting kept me company singing with several towhees and a yellowthroat warbler accompanying him. The bunting always chose the highest branch on the tree in which to sing his morning song. That made him easy to find with my binoculars. He sat and preened his feathers while gusts of wind moved the branch and ruffled his feathers. A dark-eyed junco came and landed on the floor of my balcony, giving me a rare closeup view. His trilling song is familiar in these woods. I first encountered them while hiking Whiteface Mountain. They are unafraid and friendly, sometimes accompanying you on your hike.

I often wonder what it is like to soar over these mountain ridges. Walking on the ground limits our experience to one realm. We don’t know what it is like to spread our wings and fly in any direction into the sky. I often see the birds gliding above the mountain ridges, soaring with the up and down drafts. Sometimes they literally skim the treetops. It must be thrilling to take flight and soar wherever your heart tells you to go, the entire sky open to you. Perhaps this is why I enjoy flying so much. I can pretend for a short while that I, too, can soar with the birds. 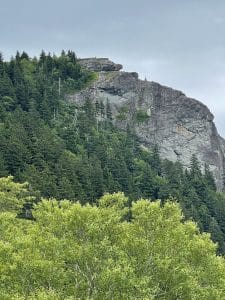 There are many bird varieties in the mountains. One morning, my friends and I hiked to the top of  Devil’s Courthouse. It is a steep climb to the summit at 5,720 feet. Legend says that the name comes from how sinister the rock formation looks from below. Some say that the devil held court in a cave below. The Cherokees thought the cave belonged to the slant-eyed giant Judaculla. Take your pick! Regardless, it is an amazing view from at the top. 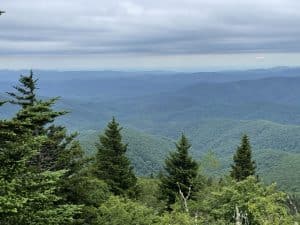 As you stand on this high rock outcropping, you can watch peregrine falcons soar and dive for their food. Eagles and hawks also inhabit these high places, as I can testify from previous hikes. We didn’t see any that day. Long-range views of three states are your reward for the climb. 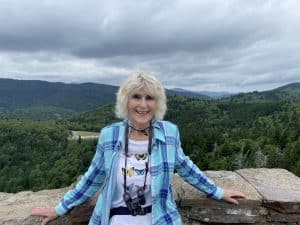 On another morning, I had a close encounter with an enormous black raven who landed on my balcony table, knocking my books and phone to the floor while I stepped inside for my binoculars. When I came back, he was trying to grab the silk ribbon on my book, The Valley of Vision, which he’d knocked to the floor along with my books and phone. I bent over and grabbed my phone from the floor, thinking he’d fly, and I wouldn’t get my photo. He didn’t seem the least perturbed and continued on with his mischief! His thick, black beak was at least three inches long and looked powerful. The next thing I knew, he was grabbing my book by the leather cover, preparing to fly off with it for his nest! Cheeky raven! I definitely put a stop to that. He returned the next day and grabbed an oak branch from the gutter above my balcony. But he dropped it as he was flying. I’m so glad that was not my book! 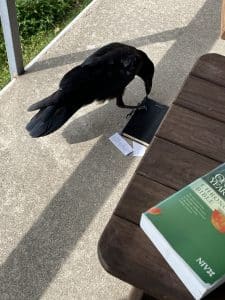 On another trail that meandered through a forest, I followed a blue capped vireo as he flitted between the branches. He finally landed on a balsam fir bough about twenty feet above the ground. Upon further study, I realized the bird had made her way back to a nest. I’m not actually sure if it was the mother or father, as they look alike, and both incubate the eggs. Suspended below a notch in the branch was a lovely, round, hanging nest. It appeared carefully crafted and looked like a cozy place in which to be born and fledge. Clearly, the parent was incubating the eggs. I watched, fascinated, for about fifteen minutes to see if the bird would fly off, but I had to satisfy myself with a photo of the nest looking up from the ground.

Life is filled with stories of birds and other creatures that make the forest their home. When I am hiking, I get to observe and marvel at the splendor of the Lord’s feathered creations.

“In his hand are the depths of the earth, and the mountain peaks belong to him.”