As the remnant of the last hurricane blew through, I contemplated the power of the wind that was roaring through the forest nearby. A day later, I walked amidst the destruction that storm had wrought upon the landscape. Trees were down everywhere. The decking across the marshy areas was punctured by limbs acting as missiles when they hit the boards. Several were permanently lodged in the wood.

In other places large trees had completely broken the edging and the decking now swerved like a funhouse. In some areas, the decking had collapsed under the weight of the fallen tree. Large trees, still healthy judging by their inner core, were uprooted and fell across the path. Some of the trees snapped off ten to fifteen feet off the ground. Their remnants lay beside the path. Based on the swath of damage, it appeared as if a microburst or mini tornado had dropped down into the forest.

What would it have been like to be in the forest when it was happening? I wonder what the deer, racoons, beavers, squirrels and opossums thought, let alone the owls and other birds that might have had homes in the trees that fell. I can only hope they escaped in time. 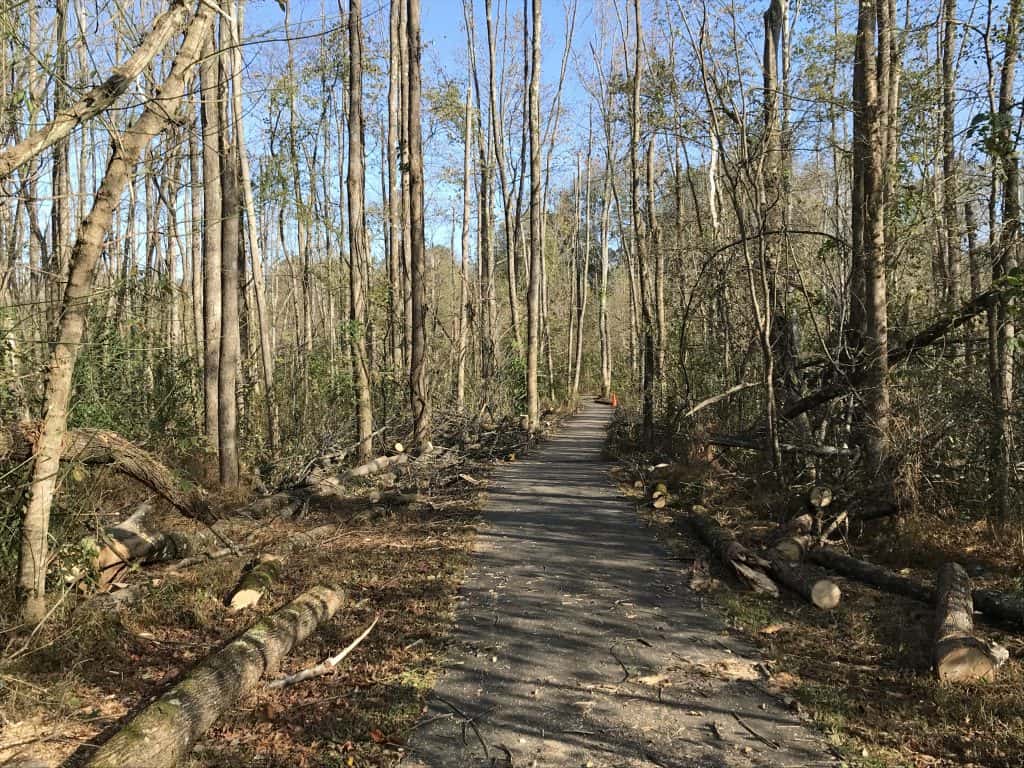 Last night the clouds were moving at breakneck speed across the full moon. Today the sky is scrubbed clear of clouds and humidity. But leaves, twigs and the seedpods of the sweet gum are scattered everywhere. I noticed tiny seeds all over the path, some left in patterns that could only have been made by water pooling and moving on the pathway. Picking up a sweet gum seed pod I shook it out onto my hand. Tiny seeds appeared as if from a saltshaker. Looking down at the path, I was struck by the sheer number of these seeds. There had to have been millions. Just like the stars in the sky and the sand in the ocean. And from just one seed, a hundred-foot tree can grow. Amazing.

Much of what nature unleashes upon us is beyond our control or understanding. And so is the God who is behind all this power. This made me reflect upon how we view natural power and divine power. Do we think they are two different things? Do we attribute hurricanes and microbursts to “mother nature” or to God? The answer affects more than just your opinion about weather events. If affects your appreciation and relationship with the most high God who controls those events.

Nothing in this world is out of the purview of God. No act of nature, no storm of life, physical or spiritual, is outside His realm. The entire universe is His realm. He created it, including every star you can see and those you can’t see. He knows every planet, star, comet, black hole, sun and galaxy out there. He is bigger than all of them. He has more power than a nuclear plant or the warp drive on the starship Enterprise. He is more powerful than the microburst that felled those trees or even a tsunami. He flooded the earth in forty days and started over with Noah and his family. And He will someday start over with a new earth and a new Jerusalem coming down out of the heavens. He’s not finished.

In the meantime, let’s contemplate this power. Why? Because it makes His love for you much more precious. And it gives you perspective on who is watching over your every breath. The God who created you can turn water into wine. He made the fire come down for Elijah even though the wood and sacrifice were soaked with water. This is the God who told Moses that he could not look at Him directly or he would be toast. So God put him in the cleft of the rock and covered him with His hand as He passed by. This is the God whose glory is so bright that after He met Moses on the mountain to give him the tablets, his face glowed with the radiance of God. This is the Creator who made the waters of the Red Sea pile up while his people crossed on dry land. Convinced yet?

How did He do all that? We don’t know. Nor can our brains fully comprehend this kind of intelligence and power. But we do know it’s true because it’s preserved for us in scripture. This gives us a choice. Believe that the God who created the earth has more power than a microburst,  a hurricane, an earthquake or a tsunami, or believe that you are at the whim of “mother nature” or some other nameless “force.” You can minimize God’s power, or you can choose to worship this mighty God who created you and the earth, who holds the world together, and who cares deeply about every living creature, especially you. The other choice is empty of power, protection and love. You get to choose.

“But if serving the LORD seems undesirable to you, then choose for yourselves this day whom you will serve, whether the gods your ancestors served beyond the Euphrates, or the gods of the Amorites, in whose land you are living. But as for me and my household, we will serve the LORD.”