In winter, the fungi and lichens on trees provide most of the color and artistic design you’ll see on your walk. This is especially so after a rain when the colors intensify. Moisture makes the bark of the trees much darker often serving as a foil to the bright white or multi-color lichens. Sometimes the white stands out like polka dots on the dark bark. Other times there will be a round, gray-green foliose lichen on the side of a tree several inches across, making it look like someone was blazing a path for you. 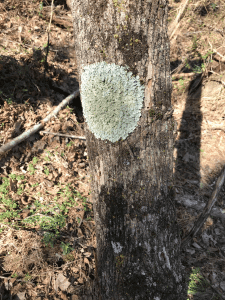 I’ve come to realize there is nothing random in God’s artistry. Today a fallen branch revealed a whole set of new pink, white and black speckled circular lichen patterns. They are not raised like the gray green blazes, but more delicate, more like fine lacework. Sometimes it’s fun to count the many different types of lichens you find just on one tree trunk. There are literally thousands of collages of His making in every direction you look. 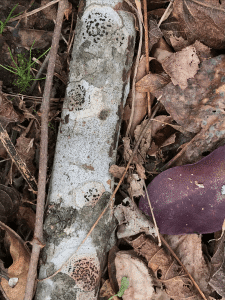 I’m especially fond of the large beefsteak lichens. Perhaps it is because I was told as a child that the fairies and elves use them as seats when it’s time to dance on midsummer night. This shelf lichen is a lovely orange-red color after a rain. Look again the next day and you’ll see it changes overnight to white as it dries out. The underside is white always with large pores. 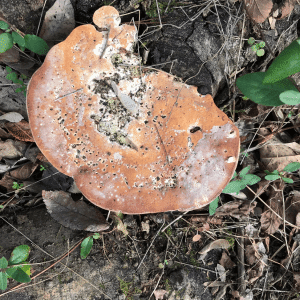 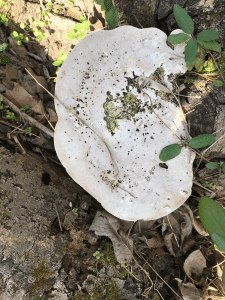 Some of the fallen trees have literally hundreds of lichens in different sizes and colors. My favorite is the fruticose lichen. It generally inhabits the tops of trees, so you don’t see it until a branch falls on the ground or a storm rips its tiny stalk from the branch, and it tumbles to the ground. I remember seeing a friend’s photo of a gnatcatcher’s nest. The bird had covered the outside of the nest with these flower-like lichens.

My other favorites are the polypores because they look like rainbows. They’re shades of blue and gray, russet, brown and cream like the turkey tail (trametes versicolor). Still others are varying shades of violet, green and cream. Some of these lichens only look like polypores. If you check underneath you will see that the surface is smooth without pores.

There is a fallen log on my walk that is covered with hundreds of lichens. When it is dry, they blend into the bark. After a rain, they put on their colorful dress. In a particularly wet place, I found a group of green and cream lichens on a log with white ruffled edges as if they were trimmed with ermine.

The different varieties of lichens remind me of walking on the beach in Nantucket Island at sunset. The rays of the setting sun illuminate the varied colors of the open scallop shells perched upright on the beach. Like the lichens, they are sequentially layered with hues of blue and gray, russet, yellow and cream. 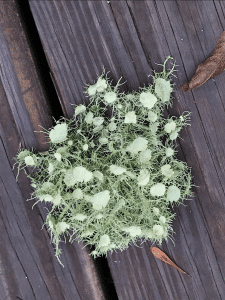 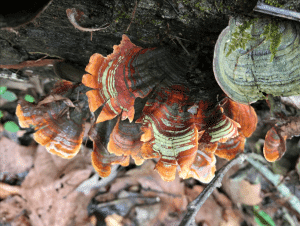 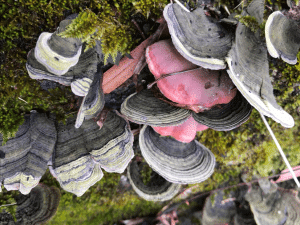 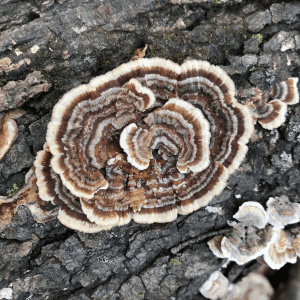 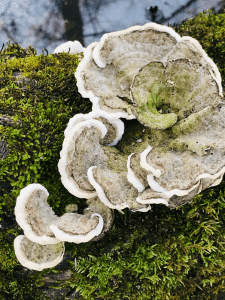 The jelly fungi are some of the most curious finds. One day as we were walking along, I saw a branch that must have fallen during the night covered with these glistening brown forms. At first, I was somewhat repulsed by these lichens, so I didn’t take a photo. The pup was quite curious about it. Some child, delighted by its gelatinous form, probably carried it away, as it wasn’t there when I went back the following day. I decided that I was going to take a photo the next time I encountered one. It seems rather unfair to label any part of God’s creation ugly. Obviously, there is a reason for this kind of fungi and where it grows. In the meantime, I’ve enjoyed examining its unusual form whenever I see it. I’ve also encountered its relative in a golden color. They come in a multitude of colors so I’m looking forward to the next discovery! 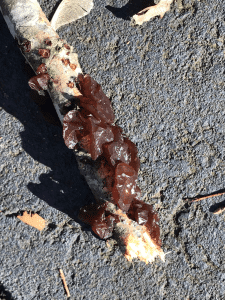 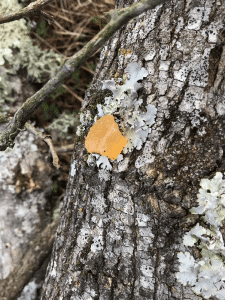 There are many more branches on the ground this morning, probably a result of the wind that came with the rain. Once again, my eye was caught by the coloring on a twig that had fallen to the side of the path. Upon closer examination, I noticed that within the lovely crust that had happily wrapped itself around the stick, there was a brain coral pattern etched within the lichen. As usual, one discovery leads to yet another more intricate type of artistry. 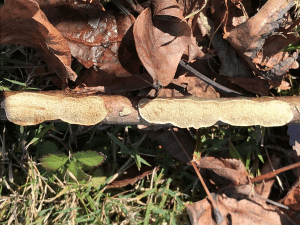 Sometimes we forget the extent of God’s imagination in creating the natural world. It is but a small sample of what awaits us in heaven.

‘…“No eye has seen, no ear has heard, and no mind has imagined what God has prepared for those who love him.’”