Often when I walk deep in the woods, I encounter nature’s mysteries that spur my curiosity.

Today in the nature preserve, my pup wanted to investigate every new smell that she encountered. This is fine as long as it doesn’t take her off the path where I can’t predict what is in the woods under the leaves or fallen trees. Her first stop today was a nice hole in the side of the path. Not wanting to encounter its owner, I pulled her away from the spot. But it set me thinking about what creature lives in that hole. There are plenty of tiny animals that could be inhabiting these tunnels. Sometimes I see that a mole has decided to burrow under the path. You can tell when it encounters a root or rock in its way because it alters its direction immediately. 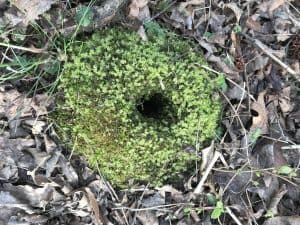 The hole that presented itself to my pup looked like a snake hole. That set me wondering if snakes take over the tunnels that other smaller creatures have made, getting not only a new house but also a meal. It would seem that you’d have to have paws to make a hole and push the dirt out. Or at least to pack it down as you tunnel. A snake can’t do that unless the soil is loose. But I often see holes with no dirt around the edges. Where did it go? How do rabbits make nests underground? Shouldn’t there be a pile of soil they’ve excavated? Curiouser and curiouser! 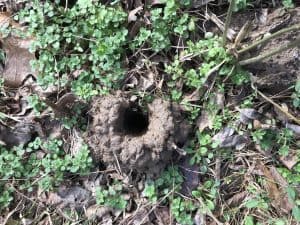 I have seen the mud castles piled on top of crawdad homes. They look like chimneys or small volcanos. But I wonder, how do they decide where to dig? And once they dig their tunnel, do they close the chimney during the winter? Crawdads dig down to the water table up to five feet below the surface when near a wetland. They come out at night to hunt plant and animal food. Or are the castle towers only a spring phenomenon? I find it fascinating that they know where the water table is close enough to the surface to dig their home. 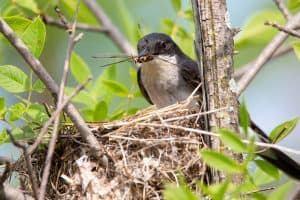 Here is another puzzle. How does a kingbird fly fast enough to catch a dragonfly? I’ve watched the dragonflies zipping around the marsh. They fly 22-34 mph at maximum speed but cruise around at 9.9 mph. Like hummingbirds, they can fly backward. You have to wonder how God supplied the kingbirds with the aerodynamic skill to catch a dragonfly mid-flight! The belted kingfisher often sits on the side of a brook hidden in the trees, looking for fish. Again, how does he do it? One minute he’s on the branch. The next, he’s diving and pulling a fish out of the water. They travel 36 mph. I’ve seen shorebirds do the same thing, and I’m struck by the skill the Lord gave them to accomplish their dinner menu. 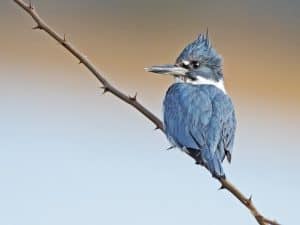 Frequently I am the first person to walk the trail in the preserve in the morning. This has its hazards as the spiders are continuously at work. If the sun is just right, I get to see the thin strand across my path, but often I feel it first on my face. Fortunately, I’ve never encountered the owner of the web. But I have to ask, how do they do that? One flying leap from one branch to another on the other side of the path? Down by the stream, I often see a glistening thread strung across the water. I wonder, does the spider know if he misses, he’s going swimming? But how does he do that? The stream is at least six feet wide. Yet, I see a new tightrope threaded across the water almost every time I sit down. 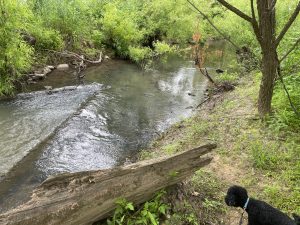 I recently had the pleasure of watching two gnatcatchers build a nest in a river birch. They were at it continuously for two days. Much of the time, they used lichens and spiderwebs to create the nest. So my question is, how do they even see the spider webs? And how do they grab hold of a sticky strand and carry it back through the air without getting it stuck in their feathers as they fly? Then, after all of that work, I saw the next day the birds had abandoned the nest. They were likely already building their second home. You have to wonder how they knew to abandon that nest. But sure enough, several days later, after a rain, the nest began to fall apart.

We humans think we are so intelligent. But God put into each creature the knowledge it needs to survive, whether it’s snatching a bug or a fish, burrowing into the soil, or building the perfect nest. Such a creative and amazing God we serve!

“The secret things belong to the LORD our God, but the things revealed belong to us and to our children forever, that we may follow all the words of this law.”