This week I was looking for new wildflowers that bloom along the edge of the pathway where I walk. One struck me as unusual in its square configuration rather than the typical circle of petals. It reminded me of dominos floating on green stems. 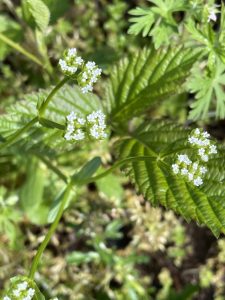 I began thinking about how God designed our plant world to reflect geometric principles. Tree trunks are always cylindrical. I’ve yet to find a square one. Branches often grow at right angles to the trees but more often at more acute angles. Most smaller plants have cylindrical stems and put out leaves and branches at differing angles. Leaves alternate or oppose each other on the stem. Some even form a circular whorl.

Most wildflowers bloom at the end of a stem, branch, or vine. The blossoms often have a circle of petals around a central crown where the pollen and reproductive organs are found. Some flowers, such as the allium, form a sphere of tiny florets. The mountain laurel has circular blossoms. But if you look closely, you’ll see that their petals are actually diamond-shaped.

Other wildflowers have a tubular formation. The buds of the crossvine are oval-shaped. The flower opens to five petals at the end of a long triangular tube. In the case of the bluebell, which I wrote about a few weeks ago, the trumpet is triangular with a bell at the end. (See: What’s in a Name?) Sometimes these tubular blossoms have only one or two petals that form a lip. They are the favorites of the hummingbirds. God designed their beaks and tongues to get into these tight spaces.

Birds also use circular shapes to build their nests. One of the most striking is the robin. She uses both sticks and mud to shape her nest. Some, like the gnatcatcher, will build within the notch of two or more tree branches. But the nest is still circular, as is the hummingbird’s nest—a perfect place for those round eggs. 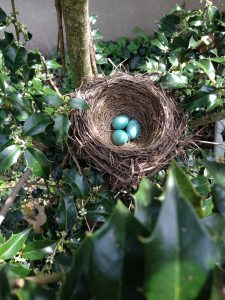 Very few things in nature are square. Some plants have the appearance of having square stems such as statice, or the branches of the euonymus or burning bush. But in fact, they are wings on a rounded stem. Humanity seems intent on building square structures. It would be interesting to see what the planet would look like if our designs more closely mimicked the plant world.

This is not to say that there aren’t sharp angles in nature. Many leaves are lance-shaped. The petals of the tea rose bend backward over time, giving them a squared-off appearance. Some flowers, such as chicory, have petals with square ends. If you study a pinecone, you’ll see triangles where the seed’s wings are. Turn it on its underside, and you’ll see a lovely series of concentric circles. The same is also true at the beach. Note the geometric angles, forms, and spirals on the shells. Each is designed with a divine eye for geometric beauty and functionality.

There is always more than meets the eye when you are walking or hiking in the natural areas. Appreciating God’s creative use of angles, cylinders, circles, and triangles within His realm is just one of the many facets of His divine intelligence of which we have yet to plumb the depths.

“Do you know how the clouds hang poised, those wonders of him who has perfect knowledge?”