This morning I walked along the woodland path in the nature preserve. I love this area as there are few people on the soft earthen trails. The woods are quiet except for the occasional birdsong or a bullfrog in the marsh. Today was cloudy from the storms that blew through yesterday, so it seemed even more still in the woods, only the occasional dripping off the leaves or shower if I bumped a sapling trying to get a good photograph.

After any rain, the woodland colors are bright. The lichens put on displays everywhere, some on rotting logs, other as little mushroom villages popping up through the leaf litter on the ground.  One solitary mushroom was such a bright fluorescent orange I thought it was a survey marker until I approached it. Sometimes I feel as if I’m in the movie Fantasia when I see a colony of orange mushrooms or a red spotted toadstool. Even the coral fungi looked like they’d just emerged from a nap. There also were some great intricate slime molds. Not only does the rain deepen the color of the existing lichens, but it also seems to trigger new fungi, especially those from spores hiding in tree bark. 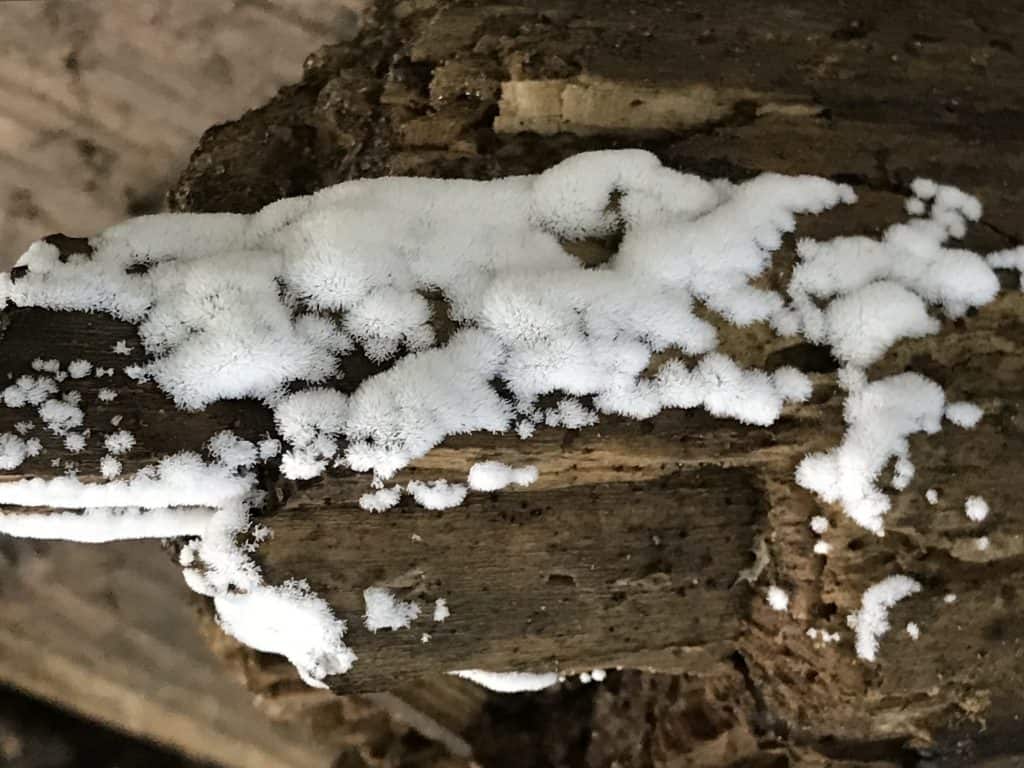 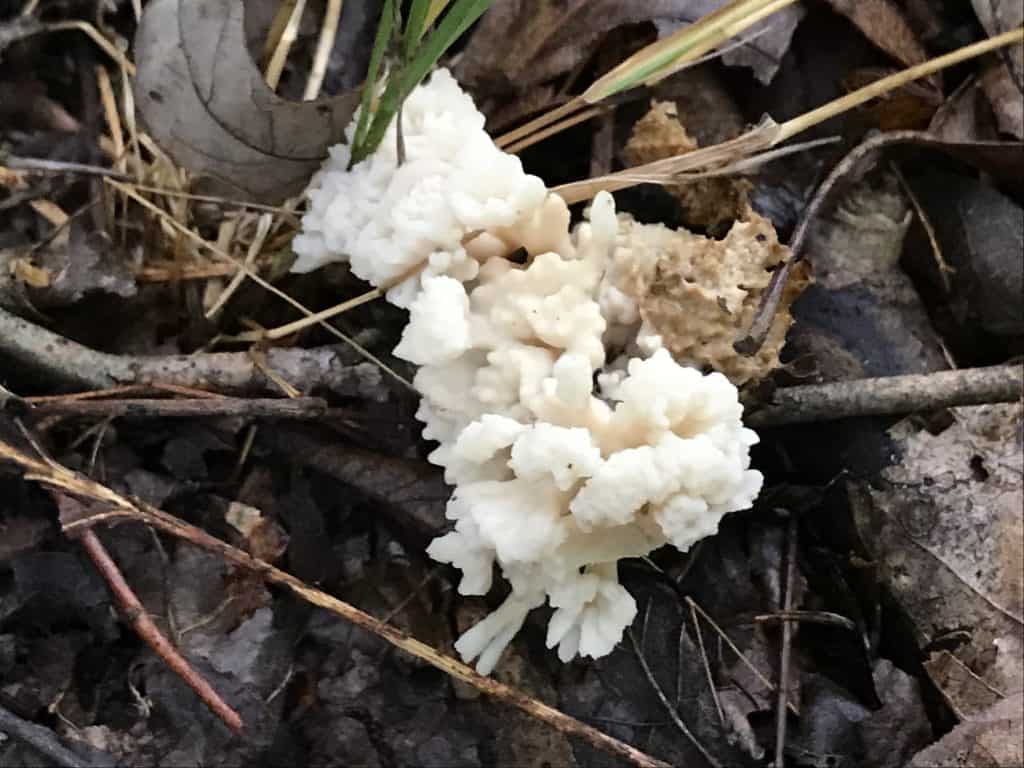 My favorite discovery was a group of earthstars. Ever since I saw one while perusing my mushroom book, I’ve been on the lookout. I think the Lord knew I needed a little encouraging, so there they were!  I’m not sure why I’m so fascinated with them. Perhaps it’s their unique shape and the fact that these are also puff balls. But I suspect it’s their lovely name. Earthstar. Look them up on the internet. I think you’ll be charmed. 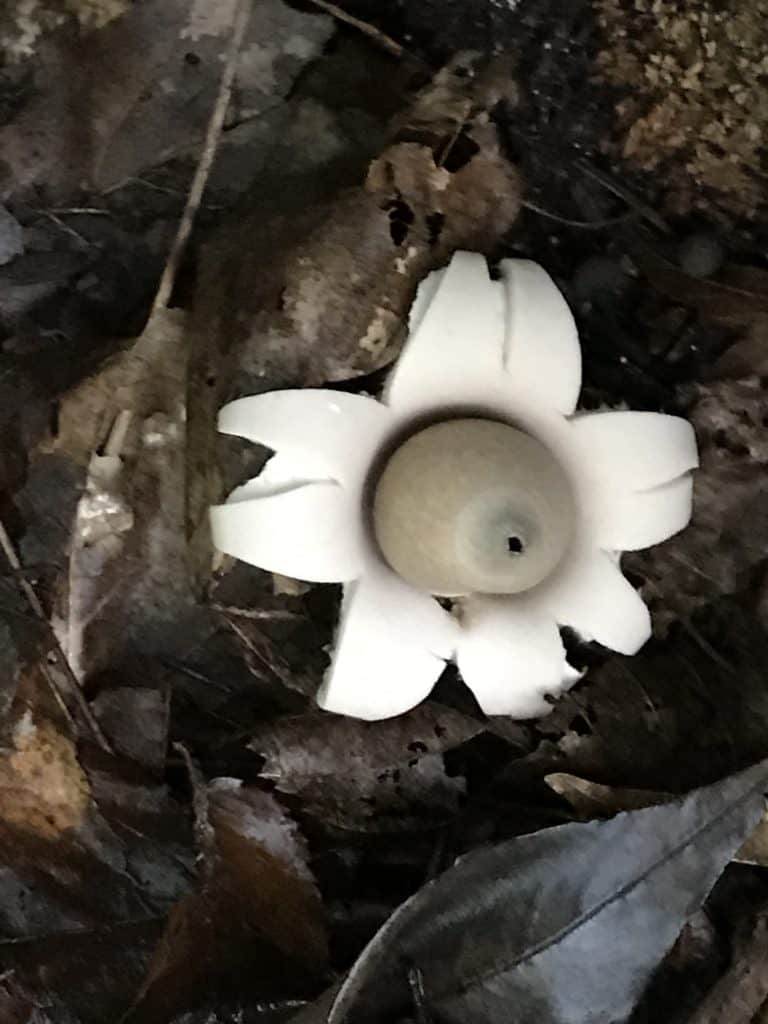 In August there are fewer wildflowers, but I did see two that had survived the hot summer days. One lovely starry campion was scattered along the upper side of the trail. Its stem is so slender the rain had pressed down on many of them, but a few were still showing their frilly petals as they dried off. Another lovely lavender flower with a terrible name (Tick-trefoil) was also floating along the sides of the path. It has very distinctive leaves which helps distinguish it from some similar species. 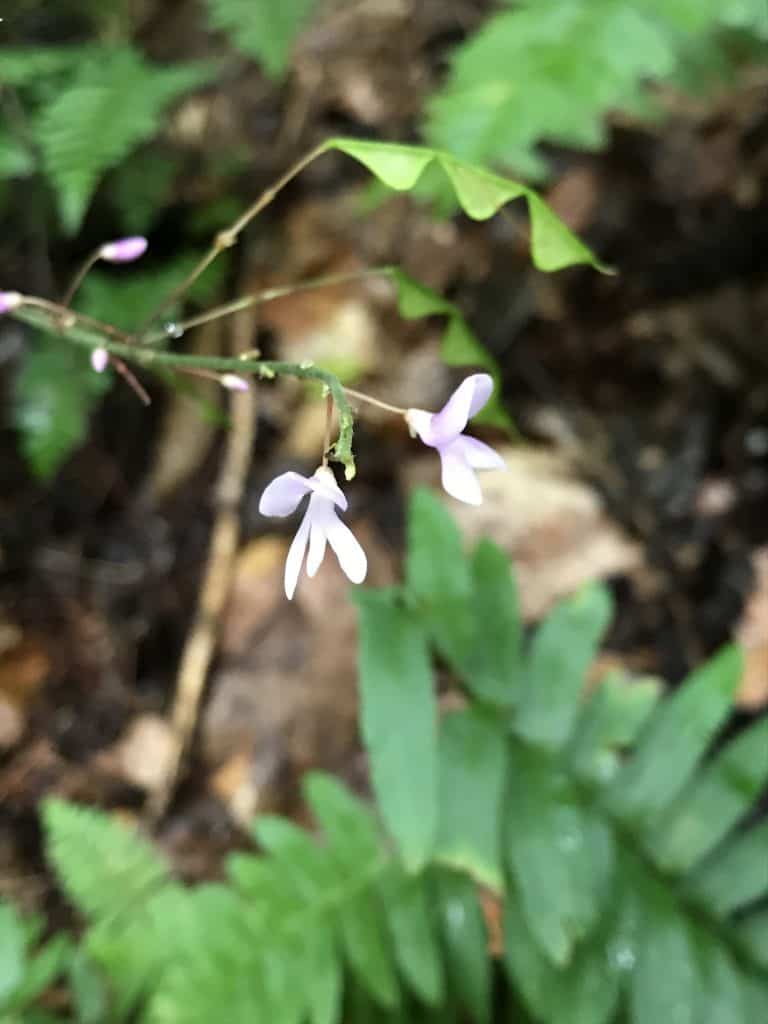 Down by the marsh, there is a deck that stretches out into the water. Some nice person left two chairs so you can sit and enjoy the view and the sounds. Today there was quite a chorus of bullfrogs, may be ten to twenty in the reeds scattered in the marshy pond. The button bush has now bloomed, but the seedpods remain. I happened to look up at one point and saw that the dead tree overlooking the deck had three dragon flies perched at the end of two branches. I studied them with my binoculars for a long time and waited to see if they flew off. They stayed perfectly still for the entire 20 minutes I sat on the marsh. I don’t know if they were drying off their wings, or perhaps they had expired, although I wouldn’t have thought they’d be able to hold on if that were the case. Next time I visit I’ll check and see. I’ve not seen many dragonflies or damselflies this summer. Not sure if it was the wet spring or something else that has caused this imbalance.

What struck me today was the ephemerality of these beautiful gifts along my path. In another day or so, the wildflowers I saw will disappear for another year, unless you know the leaf shapes that are left behind. Yet my next walk will likely be rewarded with different ones that are blooming. The little colonies of mushrooms that pop up are also ephemeral, disappearing in a day or so. Only the shelf lichens and some of the larger oyster mushroom colonies seem to last. But even these tend to fade and dry out. Today the rainstorm made the fungi come alive in the forest.

Pondering the ephemeral state of nature made me think about how gracious our God is to provide this constant stream of beauty every day. I am in awe that He created the entire earth in six days. But I am even more amazed that He is continuously creating everywhere, on every continent on the earth, every day. Human beings seem to have an insatiable desire for new things and experiences. God is completely unlimited in what He brings out for display each day. And I am always surprised, no matter how often I walk a trail, He has something new for me. I have never been disappointed. An infinite God, providing infinite landscapes of beauty for us every day, whether we are gazing at the clouds, the sunset, the rain coming down, or the myriad of treasures on a forest walk.

This God created the heavens and every galaxy, seen and unseen. He is infinite in love, power, intelligence and mercy. He is not ephemeral. He is the God who never changes. All around us, each tree, flower, and creature is changing every second of every day, aging until removed from the earth. We too are ephemeral until we have His Holy Spirit living in us. Upon accepting His son, Jesus Christ, as Lord, we are transported from the ephemeral into the eternal. Such a God deserves our honor, praise and the very best we can give Him.

Many, O LORD my God, are the wonders which You have done, And Your thoughts toward us; There is none to compare with You. If I would declare and speak of them, they would be too numerous to count.

Click here to see more photos in the gallery.