For the past week, I’ve been living and hiking in wilderness forest and mountains. Sure I’ve met people on the trails, but much of the time it’s been only me, the trail, the birds and the wildflowers. Every trail I hiked this week was to reach the summit of a mountain for the spectacular view or to the base of a waterfall. I’ve become so aware of God’s abundance and majesty on display. Everywhere I see mountain ridges, acres of land completely clothed with trees, except for the large rock outcroppings on the face of many of the mountains. I can’t even imagine how many trees there are and how long they’ve stood on these mountains. 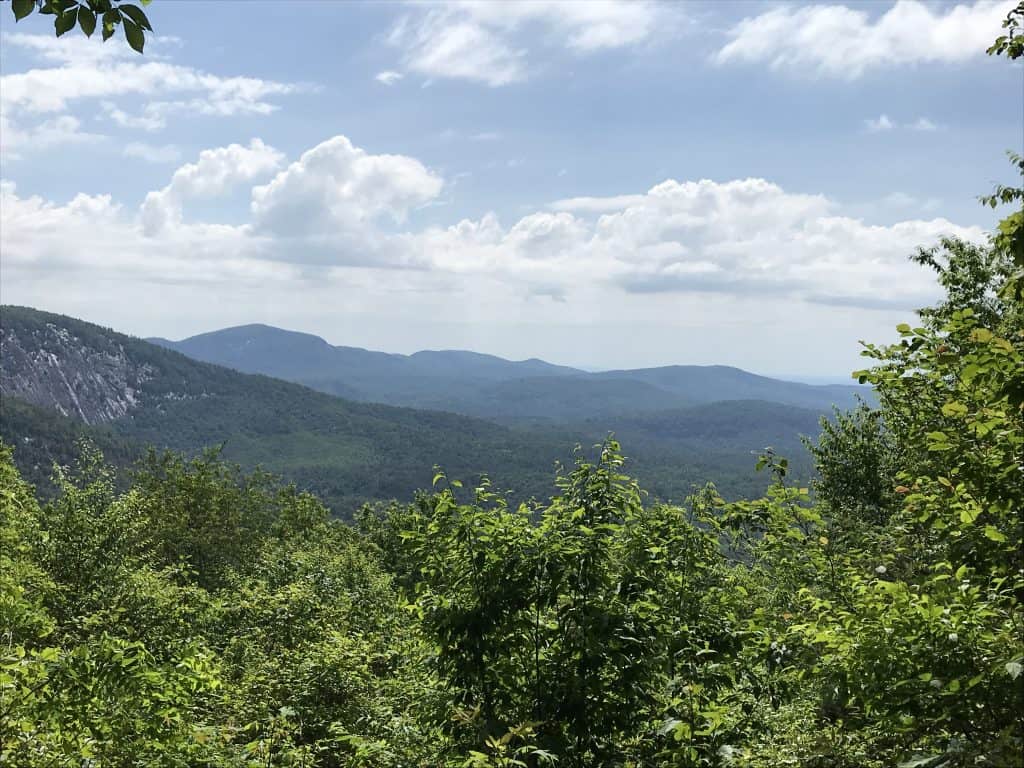 God covered the landscape with vegetation, but His delight must be in the flowers. Right now, the mountain laurel and wild orange azaleas are blooming, the rhododendron buds are swelling, those with sun have burst open, and there are wildflowers scattered at the edge of every pathway and in the woods beyond. The rivers and streams are full of water from the abundant rain. 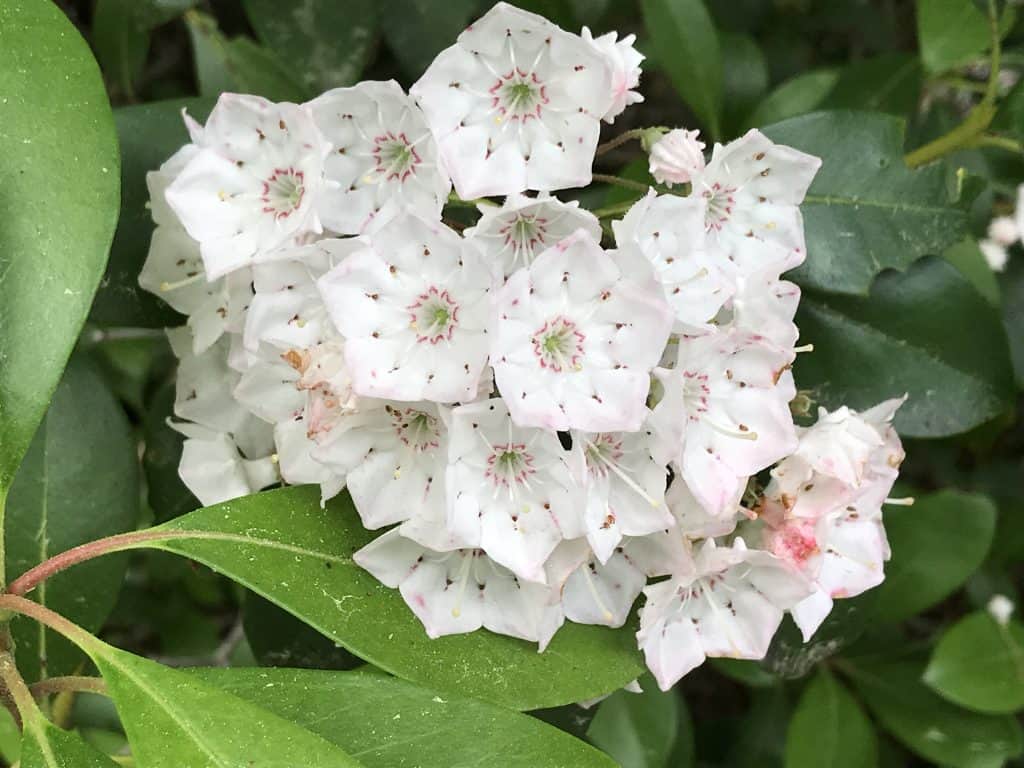 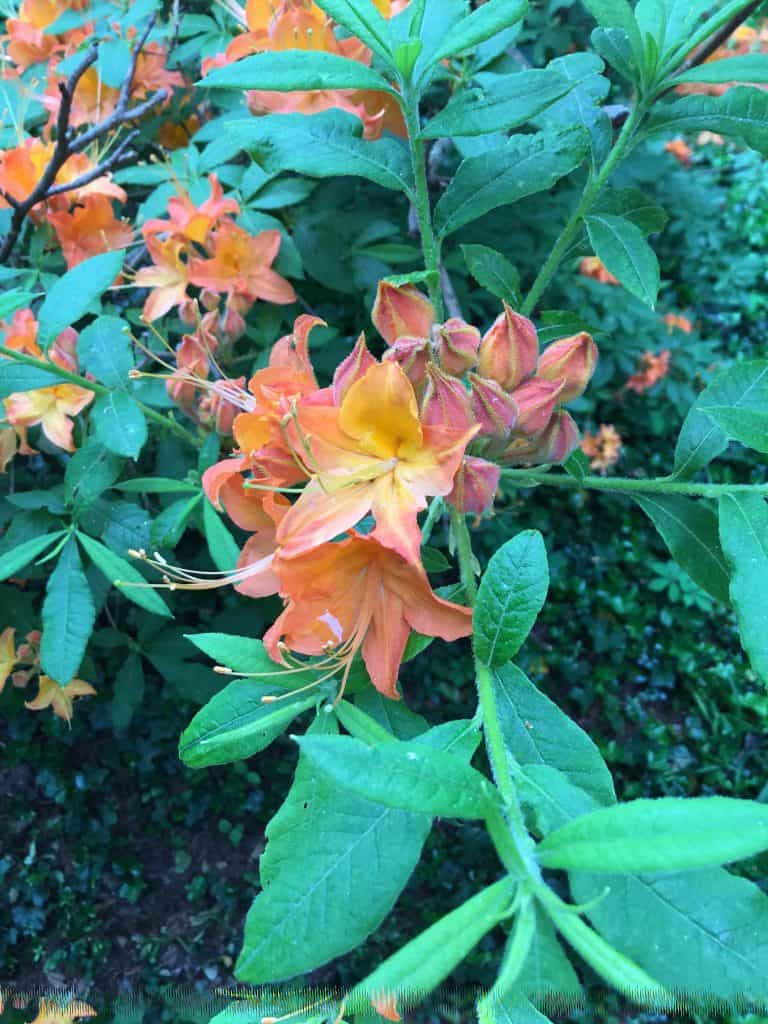 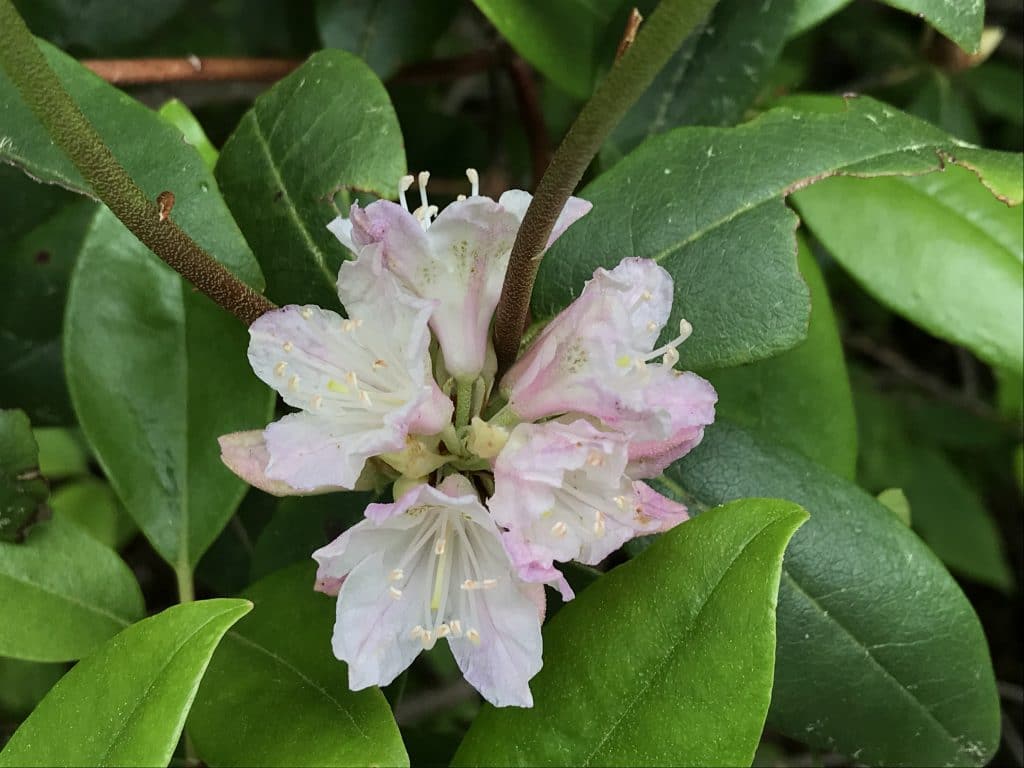 Climbing to the top of Whiteside Mountain, I was struck by His majesty. These mountains were formed by His hands and clothed by His imagination. Some of the mountains have sheer rock faces with trees and shrubs clinging to their sides wherever they can find a tiny bit of soil. Everywhere you look there are large boulders protruding from the ground that you must climb over. Beneath the path you can see large boulders where the gravel path has washed away in the recent rain. Sheer cliff faces are covered with moss and dripping water along the pathways. I love looking out on the vistas of mountain ranges as far as your eye can see. They look almost like waves of the ocean. The thousands of trees I see before me from the mountain top are of His making as well as the thousands of songbirds that make their homes in the trees. 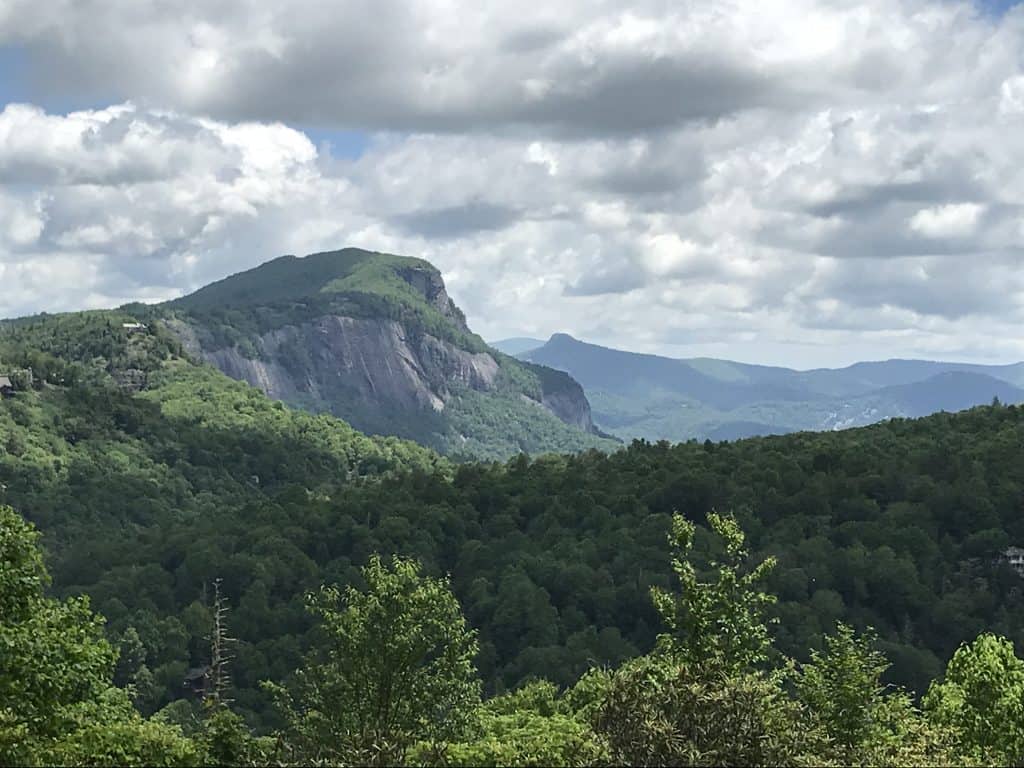 God’s power is on display throughout nature. We recognize it in the waves that crash onto the seashore and the sudden storms that overtake us. But His power is also on display in the waterfalls that course through our woodlands. Yesterday I walked to a place called Dry Falls. That is rather a misnomer as it is anything but dry. You walk down several flights of stairs and a pathway that goes down to a place mid-way in the point of the falling water. You can then walk behind the falls and feel the mist on your face as the water plunges down in front of you. Moisture is also dripping from the cave like rock face above you.

The falls were mesmerizing. I didn’t want to leave. The pounding noise was deafening as unending amounts of water fell to the rocks below. It never stopped. I found myself watching sections of water as they cascaded over the edge, falling a good hundred feet to land on the rocks below sending up a constant mist until the water settled into the stream below. The contrast between the river and the waterfall was stark. If you looked at the river, you wouldn’t even know that there was a waterfall. It was quietly meandering on as if nothing had happened. Farther down the stream there are rapids where large rocks jut out of the water, but just beyond the waterfall it was relatively placid. 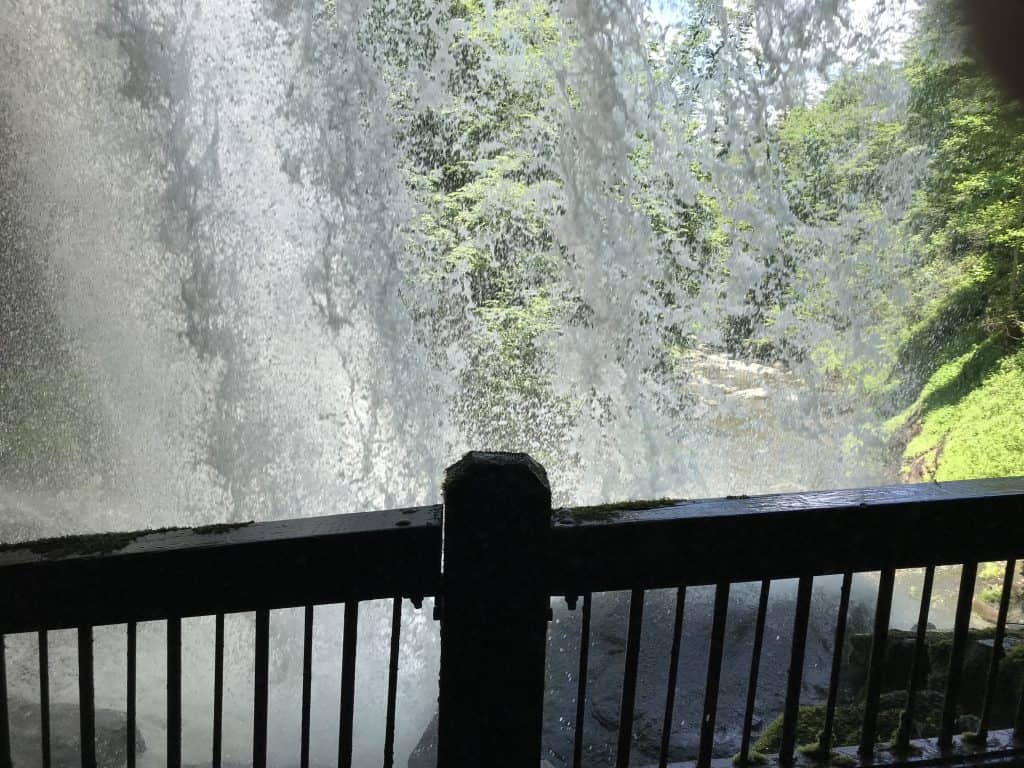 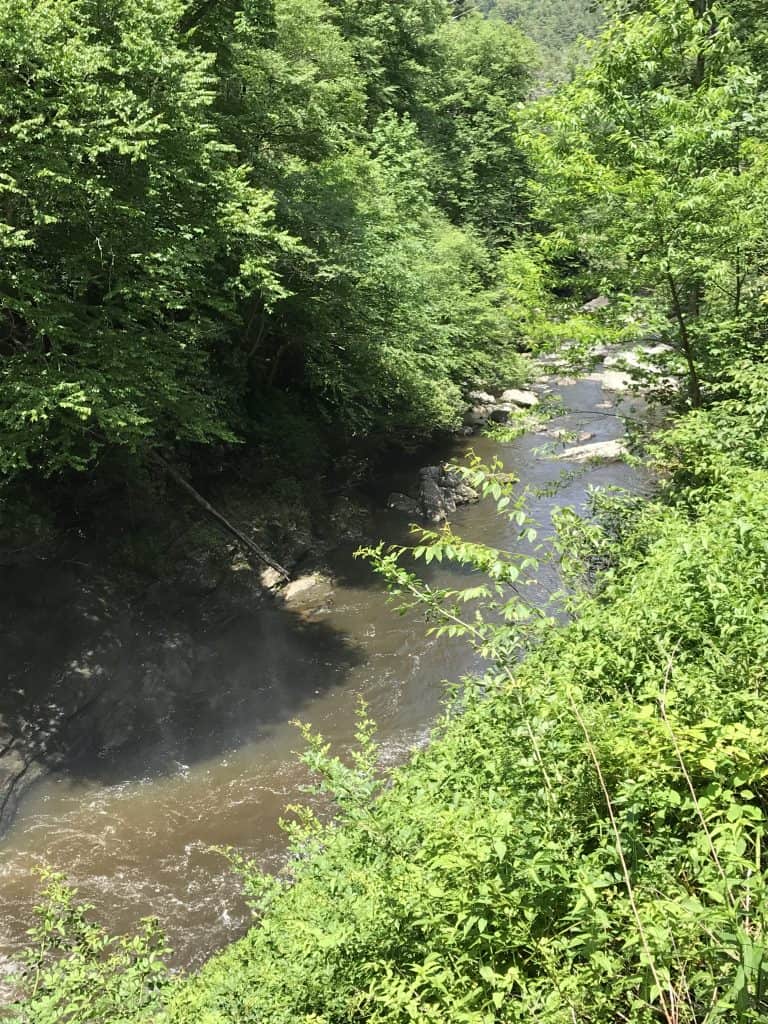 Watch this video of a beautiful waterfall.

I found myself thinking about the sheer volume of water that was cascading over the edge and down that stream and wondering where every droplet had originated. Imagine being a raindrop that fell in the last rain, merrily traveling down the river until you get to the falls and suddenly being airborne over the falls, only to be smashed on the rocks below, perhaps turning into mist, or perhaps being pounded on the rocks, broken into several pieces and then continuing on downstream. Perhaps not unlike our own journey in life.
But what really struck me was that all this abundance and power was given to us simply for our enjoyment. Of course, we know that our rivers serve a purpose as they wind their way to the ocean, feeding fish and game along the way and watering plants. But I was struck by God’s generosity in giving us so many waterfalls and also His majesty and power on display.

“Whoever believes in me, as Scripture has said, rivers of living water will flow from within them.”
John 7:38 NIV