One of the best things about spending time in the mountains is the variety of birdsong that accompanies you on your hikes. The Smoky Mountains are noted for the sheer number of birds, wildflowers, trees and lichens. I’m sure it has to do with the way the Lord has sculpted the mountains and valleys. One of the books I found in the house where I stayed told about the development of our national parks. Here is a section about the mountains where I was hiking.

“The Smokies are the tallest mountains in the Appalachian chain, hosting the world’s greatest diversity of plant, animal, and insect life of any region in a temperate zone— including more than one hundred species of native trees: spruce and hemlock, giant tulip, poplar and chestnut oaks; a greater variety of trees than in all of Europe.” (The National Parks: America’s Best Idea by Dayton Duncan and Ken Burns, page 218) 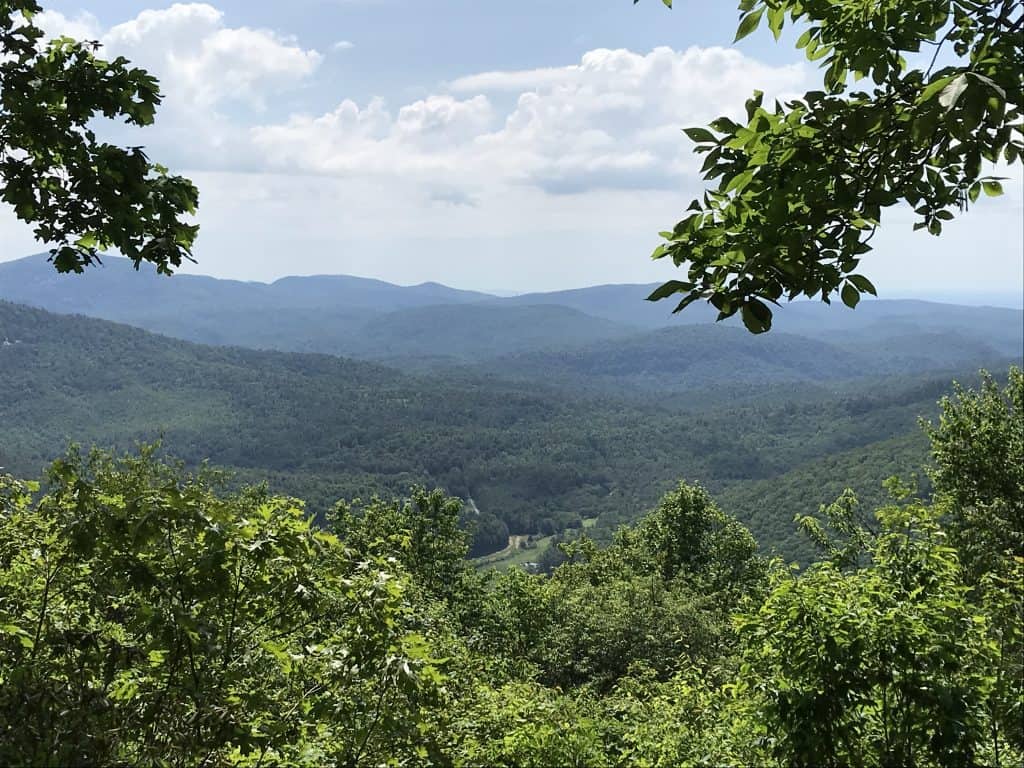 On my first hike to the top of Whiteside Mountain, I was entertained by the fluttering wings of a pair of dark eyed juncos. In the deep woods, the male’s feathers appear almost black even though they’re really a deep slate gray. Their trilling song was not one I was used to hearing in the north where I am originally from, so it wasn’t until I’d actually seen him that I realized it was a junco. His white breast and the flash of deep gray and white vertical tail bands make for easy identification.

I first encountered them halfway up the trail. There were two pairs merrily feeding and hopping about in the trees overhanging a mossy cliff that bordered my walk. On the edge of the woods, they were easier to spot than in the dense forest. They did not seem to mind my presence. And in fact, were still in the same place upon my return down the path. Perhaps that was their nesting ground. 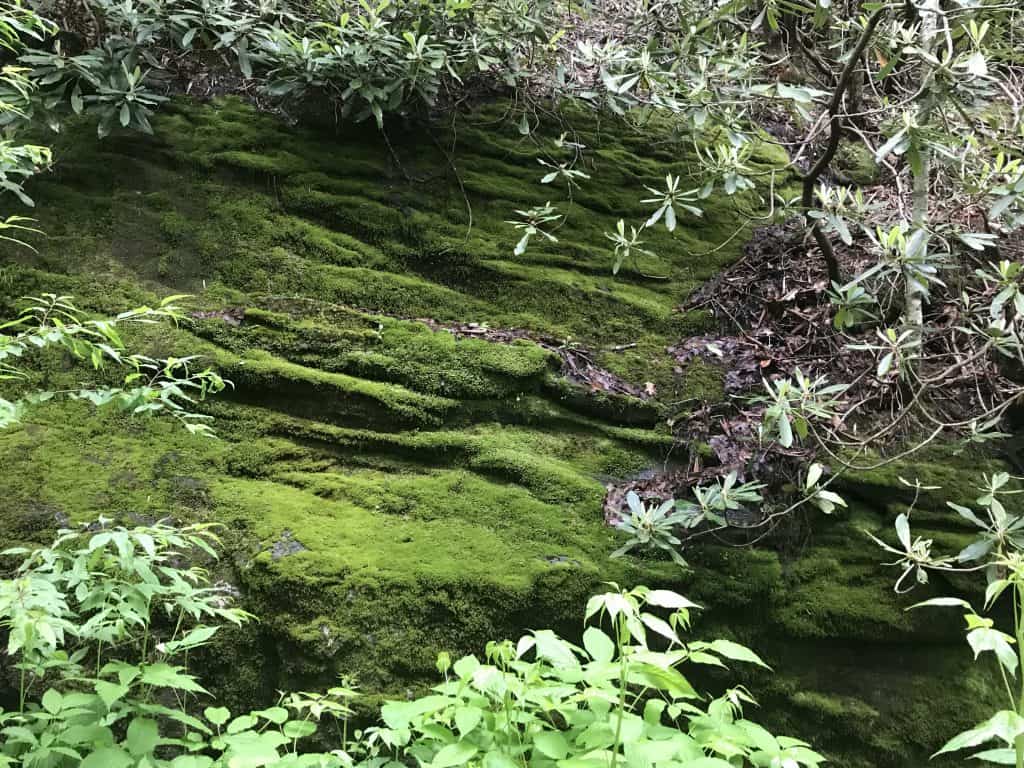 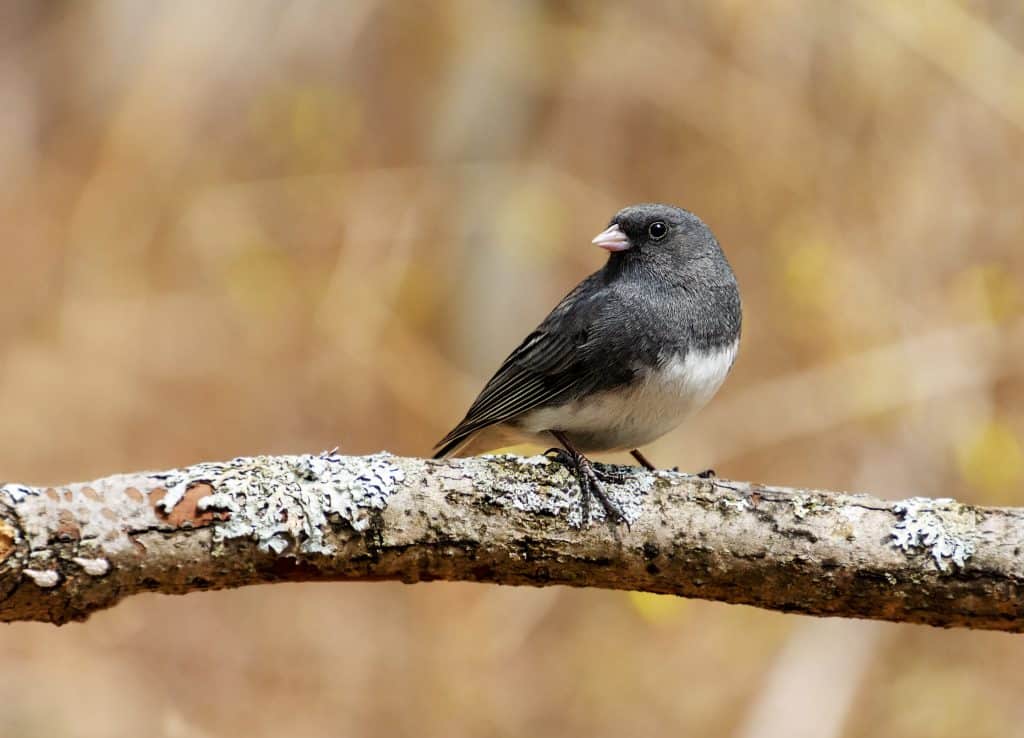 Later, toward evening, I was sitting on the deck overlooking the woods and mountains when a male junco came for a visit. He happily pranced around on the deck railing watching me. I listened to his song and watched his beak while he was singing. At first, he barely opened his beak to sing. But then as his song grew stronger, his beak opened a little more. Still, given the volume of sound emanating from his throat, I was amazed that his beak was open barely a fraction of an inch. He continued to sing even after flying to the nearby dogwood branches. He built up to quite a composition of song while waiting for another bird to answer him. I suspected he was looking for a mate. I never did see a female, but he appeared every morning and evening, flying in for a visit on the deck or nearby trees so I could enjoy his song. 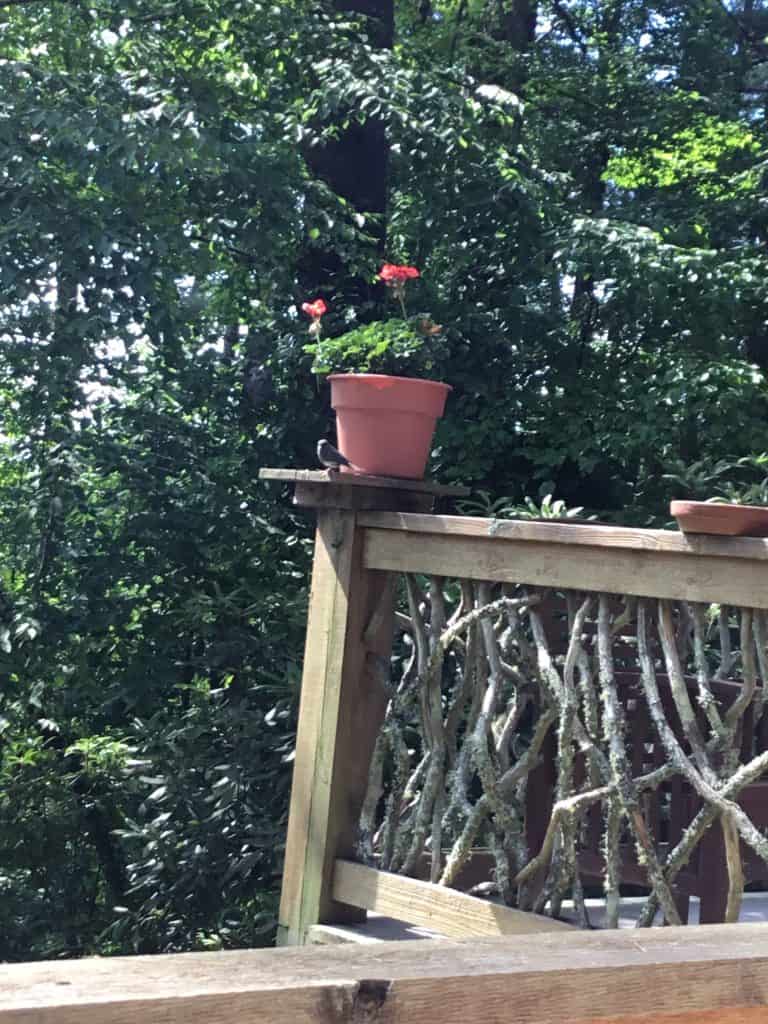 There were other junco visitors on my walks. Every day, wherever I was, there seemed to be a pair keeping me company. So much so that about halfway through my stay, I decided it was the Lord’s way of letting me know He was keeping track of my wanderings and not allowing me to become anxious about hiking in the mountains. There is much to be cautious about when hiking on some of these rugged trails, not only where you put your feet, whether on a rocky or gravely trail, climbing over a network of exposed roots, or the animals that can interfere with your day such as bears and snakes. Fortunately, I didn’t see any bears, although I did hike Bearpen Mountain. I did encounter a rattlesnake, not one of my favorite creatures.

Part of the comfort in knowing God is that He displays his character to us in so many ways. His love, companionship and friendship seemed so close to me merely because He chose to send me birds to keep me company while hiking or sitting on the deck in the evening light. He is not a God that is far away or that cannot be found. He’s right there letting us know He can be found, and once found, will never leave us or forsake us.

“Be strong and courageous. Do not be afraid or terrified because of them, for the LORD your God goes with you; he will never leave you nor forsake you.”